FEATURES OF THE BUDGET. 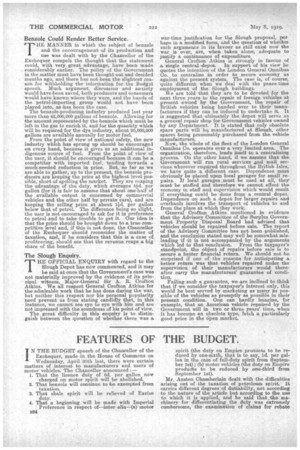 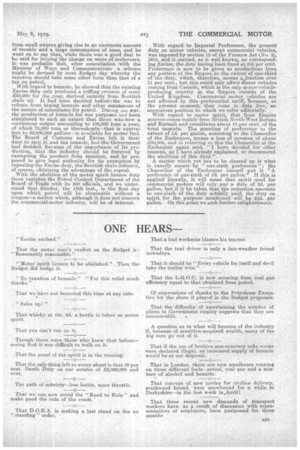 IN THE BUDGET speech of the Chancellor of the Exchequer, made in the House of Commons on Wednesday, April 30th last, there were certain matters of interest to manufacturers and users of motor vehicles. The Chancellor announced :—

1. That the licence duty of 6d. per gallon now charged on motor spirit will be abolished. 2. That benzoic will continue to be exempted from taxation.

3. That shale spirit will be relieved of Excise duty. 4. That a beginning will be made with Imperial Preference in respect of—inter alia—(a) motor B24 spirit (the duty on Empire proctects to be reduced by one-sixth, that is to say, id. per gal

lon in the case of full-duty spirit ?mm 'September 1st); (b) motor vehicles (the duty on Empire produdts to be reduced by one-third from September 1st).

Mr. Austen Chamberlain dealt with the difficulties arising out of the taxation of• petroleum spirit. It carries different degrees of dutiability, not according to the nature of the article but according to the use to which it is applied, and he said that .'the machinery for differentiating the duty was extremely cumbersome, the examination of claims for rebate from small owners giving rise to an enormous amount of trouble and a large consumption of time, and he went on to say that, while there was a good deal to be said for levying the charge on users of motorcars, it was probable that, after consultation with the Minister of Ways and Communications a scheme might be devised by next Budget day whereby the taxation should take some ether form than that of a tax ,on petrol, With regard to benzole, he showed that the existing Excise duty only produced a trifling revenue of some X50,000 for the year, derived entirely from Scottish shale oil. • It had. been decided before,' the war to refrain from taxing benzole and other substances of the nature of substitutes for petrol, During cue moue. the production of bonzole for war purposes had been stimulated to such an extent that there was.now a continuous output amounting to 100,000 tons a year of which 75,000 tons or thereabouts—that is equivalent to 20,000,000 gallons—is available for motor fuel. The Board of Customs and Excise felt it their duty to step in and tax benzole, but the Government had decided, because of the importance of its production, that tho industry should be fostered by exempting the product from taxation, and he proposed to give legal authority for its exemption by repealing the Excise. duty, the Scottish shale industry, of course, obtaining the advantage of the repeal. With the abolition of the motor spirit licence duty there vanishes the Petrol Control Department of the Board of Trade with its 300 officials, and we understand that Sunday, the 18th inst., is the first day 'upon which petrol will be obtainable without a coupon—a matter which, although it does not concern the commercial-motor industry, will be of interest. With regard to Imperial Preference, the present. duty on motor vehicles, except commercial vehicles, was imposed by section 12 of the Finance Act (No. 2), 1915, and it carried, as is well known, no correspond,. • ing Excise, the duty having been fixed at 33i per cent. Preference is now to be given to productions from any portion of the Empire, to the extent of one-third of the duty, which, therefore, means .afraction over 11 per cent., but this could only affect motor vehicles corning from Canada, which is the only, motor-vehicleproducing country. m the Empire outside of the United Kingdom. Commercial motor vehicles are not affected by this •preferential tariff, emus°, at the present moment, they come in duty free, an anomalous position to which we refer editorially. With regard to motor spirit, that _from Empire sources comes mainly from British North-West Borneo and Eurinah and constitutes about 18 per cent. of the total imports, The .granting of . preference to the extent of id. per gallon, according to the Chancellor of the Exchequer, means a loss of revenue of about £00,000, and in referring to this the Chancellor of the Exchequer again said, "I have decided for other, reasons, as' I have already. explained, to recommend the abolition of this duty."

A matter which yet has to be cleared up is what is exactly meant • by " one••sixth preference " ; the Chancellor of the Exchequer himself put it "A preference of one-sixth of id. per gallon." If this is applied literally, it will mean that spirit used for commercial motors will only pay a duty of 2d. pee . gallon, but if it be taken that the reduction amounts to one-sixth Of the duty actually paid, the duty On. , spirit for the purpose mentioned will be 21d. Per gallon. On this point we seek further enlightenment.