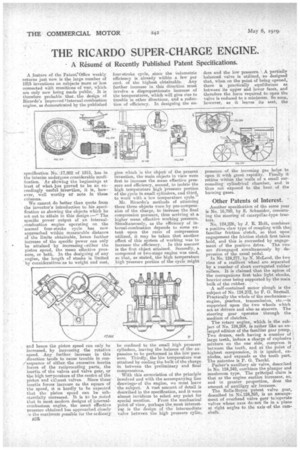 A feature of the Patent*Office weekly returns just now is the large number of 1915 inventions on subjects more or less connected with munitions of war, which are only now being made public. It is therefore probable that, the design of Ricardo's improved internal-combustion engine, as demonstrated by the published specification No. .17,882 of 1915, has in the interim undergone considerable modification. As ,shivving the beginnings at least of what lies proved to be an exceedingly useful invertian, it is, however, well worthy -or note in these columns.

We cannot do better than quote from the inventor's introduction to his specification as showing the objects which he set out to attain in this design :—" The specific power output of an internalcombustion engine operating on the normal four-stroke cycle MIA now approached within measurable distance of the limits obtainable, hence further increase of the specific power can only be attained by increasing'-either the piston speed, the mean effective pressure, or both. In the designing of any • engine, the length of stroke is limited by considerations:as to weight and cost,

and hence the piston speed can only be increased. by increasing the rotative speed. Any farther increase in this ,direction tends to cause trouble in con/sequence of eitherthe exceseive inertia forces of the reciprocating parts, the inertia of the valves and valve gear, or the high terrperature of the centre of the piston and s-ahaust valves. Since these inertia forces •increase as the square of the speed, it is hardly to be expected that the piston speed can be su'b • stantially increased. It is to be ,noted that in most modern designs of internalcombustion engine, the mearl effective pressure obtained has approached closely .-o the maximum possible for the ordinary

four-stroke cycle, since the volumetric efficiency is already within a few per cent, of the highest obtainable.further increase in this directio must involve a disproportionate increase of the temperatures, which will give rise to trouble in other directions, and a reduction of efficiency. In designing the en

gine which is the objectof the present invention, the main objects in view were first to increase the mean effective pressure and efficiency, .second, to isolate the high temperature high Pressure portion of the cycle in small cylinders, and third, to work with a low temperature cycle."

Mr. Ricardo's methods of attaining these three objects were by pre-compression of the charge, to in.:II-ease the final compression pressure, thus arriving at a higher mean effective working pressure. Simultaneously, as the efficiency of internal-combustion depends to some extent upon the natio of compression utilized, it may be taken that another effect of this system of working was to increase the efficiency. In this manner is the first object attained. Secondly, a compound or two-stage engine was used, so that, as stated, the high temperature high pressure portion of the cycle might

be confined to the small high pressure cylinders, leaving the balance of the expansion to be performed in the low pressure. Thirdly, the lcia, temperature was attained by cooling the bulk of the charge

• in between the preliminary and final compressions.

With this enunciation of the principle involved and with the accompanying line drawings, of the engine, we must leave the subject. A vast amount of detail is described in the specification, and it were almost invidious to select any point for special mention. From the mechanical point of view, perhaps the most interesting is the design of the intermediate Valve between the high pressure cylin,

ders and the low pressure. A partially • balanced valve is utilized, so designed that, when on the point of being opened, there is practically equilibrium as between its upper and lower faces, and therefore the force required to open the valve is reduced to a minimum. So soon, however, as it leaves its seat, the presence of the incoming gas he ps to open it with great rapidity. Finally it retires within the walls of a sma 1 surrounding cylindrical chamber, and is thus not exposed to the heat of the burning gases.

Another specification of the same year is No. 16,798, by E. Schneider, concerning the steering of Caterpillar-type tractors.

No. 124,226,: by J. E. Holt, combines a positive claw type of coupling with thei familiar friction clutch, so that upon' engagement the friction clutch first takes: hold, and this is succeeded by engagement of the positive drive. The two are disengaged simultaneously by depression of the usual pedal. In No. 124,271, by N. McLeod, the two rims of a resilient wheel are separated by a number of short corrugated rubber rollers. It is claimed that the apices of the corrugations first take light shocks, heavier ones being supported by the main bulk of the rubber.

A self-contained motor plough is the subject of No. 124,272, by F. G. Brettall. Practically the whole of the mechanism—. engine, gearbox, transmission, etc.—is supported upon the two wheels which act as drivers and also as steerers. The steering gear operates through the medium of clutches.

The' rotary engine, which is the subject of No. 124,284, s rather like an enlarged edition of the familiar gear pump. Two drums, each having a number of large teeth, induce a charge of explosive mixture on the one side, compress it between the teeth, and at the point of highest compression, it is ignited, explodes, and expands as the teeth part. The patentee is P. G. Tacchi.

Parker's auxiliary air valve, described in No. 124,349, combines the plunger and mushroom type. The principal claim is that as the engine suction increases, so, and in greater proportion, does the amount of auxiliary air increase. The Rolls-Royce patent valve gear, described in No.124,393, is an asrangement of overhead valve gear to loperate valves whose axes do not lie in a plane at right angles to the axis -of the carashaft.