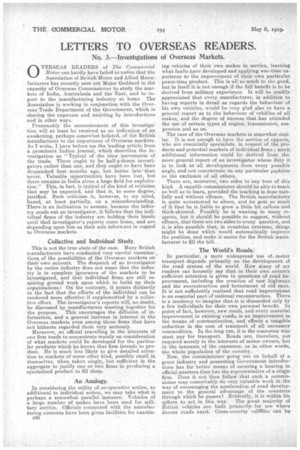 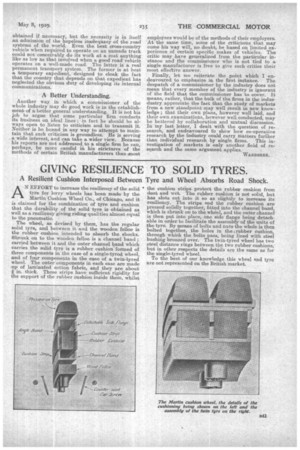 Page 14, 8th May 1919 — LETTERS TO OVERSEAS READERS.
Close
Noticed an error?
If you've noticed an error in this article please click here to report it so we can fix it.
Keywords : Economics

No. 3.—Investigations of Overseas Markets.

0 ,VERSEAS READERS of The Commercial Motor can hardly have failed to notice that the Association of British Motor and Allied Manufacturers has recently sent out Major Goddard in the capacity of Overseas Commissioner to study the markets of India, Australasia and the East, and to report to the manufacturing industry at home. The Association is working in conjunction with the Overseas Trade Department of the Government, which is sharing the expenses and assisting by introductions and in other ways.

Presumably the announcement of this investiga: tion will at least be received as an indication of an awakening, perhaps somewhat belated, of the British manufacturer to the importance of Overseas markets. As I write, I have before me the leading article from a prominent. Indian journal, which describes the investigation as "Typical of the slow movements of the trade. There ought to be half-a-dozen investigators rather than one, and they ought to have been despatched four 'months ago, but better late than never. Valuable opportunities have been lost, but there remains in India alone a huge field for exploitation." ' This, in fact, is typical of the kind of criticism that may be expected, and that is, to some degree, justified. Such criticism is, however, to my mind, based, at least partially, on a misunderstanding. There is an inclination to assume, because the industry sends out an investigator, it follows that the individual firms of the industry are holding their hands until Thal investigator's reports come home, and are depending upon him as their sole informant in regard to Overseas markets.

This is not the true state of the case. Many British manufacturers have conducted very careful examina-, tions of the possibilities of the Overseas markets on -their-own account. The despatch of an investigator by the entire industry does not mean that the industry is in complete ignorance of the markets to be investigated, and that individual firms are still requiring ground work upon which to build up their organizationsl On the contrary, it points distinctly to the fact that the efforts of the individual can be rendered more effective if supplemented by a collective effort. The investigator's reports will, no doubt, be discussed by manufacturers meeting together for the purpose. This encourages the diffusion of information, and a general increase in interest in the Overseas markets even among those firms that have not hitherto regarded them very seriously.

Moreover, an official .travelling in the interests of one firm tends to concentrate mainly on consideration of what markets could be developed for the particular products which he knows that firm intends to produce. He is much less likely to give detailed attention to markets of some other kind, possibly small in themselves, when taken singly, but sufficient in the aggregate to justify one or two firms in producing a specialized product to fill them.

In considering the utility of co-operative action, as additional to individual action, we may take what is perhaps a somewhat parallel instance. Vehicles of a large number of makes have been used for military service. Officials connected with the manufacturing concerns have been given facilities for examin n36 ing vehicles of their own makes in service, learning what faults have developed and applying war-time ex perience to the improvement of their own particular peace-time product. This is all so much to the good, but in itself it is not enough if the full benefit is to be derived from military experience. It will be readily appreciated that every manufacturer, in addition to having reports in detail as regards the behaviour of his own vehicles, would be very glad also to have a general report as to the behaviour of vehitles of all makes, and the degree of success that has attended the use of certain types of engine, transmission, suspension and so on.

The case of the Overseas markets is somewhat similar. It is not enough to have the service of experts, who are essentially specialists, in respect of the products and potential markets of individual firms ; much additional information could be derived from the more general report of an investigator whose duty it is to look at all developments from every possible angle, and not concentrate on any particular prAletn to the exclusion of all others.

There are, moreover, two sides to any tour of this kind. A capable commissioner should be able to teach as well as to learn, provided the teaching is done tactfully and without offence. The British manufacturer is quite accustomed to abase, and he gets so much . of it that he is liable to grow a little bit callous and thick-skinned. Possibly he is wanting in many respects, but it should be possible to suggest, without offence, that there are two sides to every question, and it is also possible that, in countries overseas; things might be done which would automatically improve the position, and make it easier for the British manufacturer to fill the bill.

In particular, a more widespread use of . motor transport depends primarily on the development of the road system of the world. How many of my readers can 'honestly say that in their own country sufficient attention is given to questions of road improvement, including the creation of new highways and the reconstruction and betterment of old ones. It is not sufficiently realized that road improvement ie an essential part of national reconstruction. There is a tendency to imagine that it is demanded only by a few individuals for their own personal benefit. In point of fact, however, new roads, and every material improvement in elisting roads, is an improvement in the means of communication, and effects a tangible reduction in the cost of transport of all necessary Commodities. Its the long run, it is the consumer who Must pay for transport. Roads are, therefore, not required merely in the interests of motor owners, but in the interests of the consumer, or itt other words, the whole population of the country.

• Now, the commissioner going out on behalf of a great industry and possessing Government introductions has far better means of securing a hearing in official quarters than has the representative of a single firm. Does it not then follow that such 'a commissioner may conceivably do very valuable work in the way of encouraging the acceleration of road development to the general advantage of the countries through which he passes? Evidently, it is within his sphere to act, in this way. The great majority of British vehicles are built primarily for use where decent roads exist. Cross-country. vehibles can be

obtained if necessary, but the necessity is in itself an admission of the hopeless inadequacy of the road systems of the world. Even the best cross-country vehicle when required to operate on an unmade track could not conceivably do its work at a cost anything like as low as that involved when a good road vehicle operates on a well-made road. The latter is a real permanent transport system. The former is at best a temporary expedient, designed to cloak the fact that the country that depends on that expedient has neglected the obvious duty of developing its internal communications.

Another way in which a commissioner of the whole industry may do good work is in the establishment of a better general understanding. It is not his ioh to argue that some particular firm conducts its business on ideal lines ; in fact he should be always open to listen to criticism and to transmit it. Neither is he bound in any way to attempt to maintain that such criticism is groundless. He is serving a wide interest, and can take a wider view. Because his reports are not addressed, to a single firm he can, perhaps, be more candid in his strictures of the methods of certain British manufacturers than most employees would be of the methods of their employers. At the same time, some of the criticisms that may come his way will, no doubt, be based on limited experience of certain specific makes of vehicles. The critic may have generalized from the particular instance and the commissioner who is not tied to a single manufacturer is free to give such critics their most effec‘tive answer.

Finally, let me reiterate the point which I endeavoured to emphasize in the first ingtance. The despatch of a commissioner by the industry does not mean that every member of the industry is ignorant of the field that the commissioner has to ewer. It means, rather, that the bulk of the firms in the indus-clustry appreciate the fact that the study of markets from a new standpoint may well result in new knowledge ; that their own plans, however well laid, and their own examinations, however well conducted, may be bettered by collaboration and mutual discussion. In my last letter, I dealt with the question of research, and endeavoured fo show how co-operative research by the industry could carry matters further than individual research by single firms. This investigation of markets is only another field of research and the same argument applies.