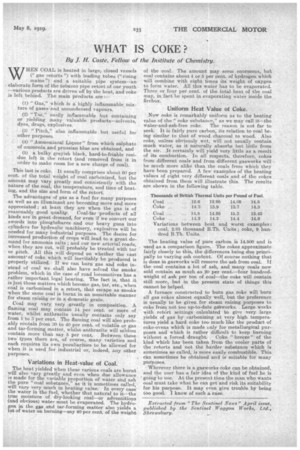 Page 13, 8th May 1919 — WHAT IS COKE?
Close
Noticed an error?
If you've noticed an error in this article please click here to report it so we can fix it.

By J. H. Caste, Fellow of the Institute of Chemistry.

WHEN COAL is heated in large, closed vessels (" gas retorts ") with leading tubes (" rising mains ") and a suitable pipe system—an elaborate form of the tobacco pipe retort of our youth —various products are driven off by the heat, and coke is left behind. The main products are:—

(1) "Gas," which is a highly inflammable mix-.' ture of gases and uncondensed vapours.

(3) "Pitch," also inflammable but useful for other purposes. ..

(4) " Ammoniacal Liquor' from which sulphate of ammonia and prussian blue are obtained, and

(5) .a bulky greyish black, hard-to-friable residue left in the retort (and removed from it in order to make room for a new charge of coal).

This last is coke. It usually comprises about 60 per cent. of the total weight of coal carbonized, but the amount may vary greatly and consistently with the nature of the coal, the temperature, and time of heating, and the size and form of the retort.

The advantages of gas as a fuel for many purposes -as well as an illuminant are becoming more and more appreciated ; at least they are when the gas is of

reasonably good quality. Coal-tar products of all i

kinds are" n great demand, for even if we convert our swords into ploughshares and our heavy guns into cylinders for hydraulic machinery, explosives will be needed for many industrial purposes. The desire for increased production of crops will lead to a great demand for ammonia salts ; and our new arterial roads, when they are cut, will probably be treated with tar or pitch. All this will depend on whether the vast amount.of coke which will inevitably be produced is properly utilized. If we can burn gas and coke instead of coal we shall also have solved the smoke problem, which in the case of road locomotives has a rather important legal bearing. The fact is, that it is just those matters which become gas, tar, etc., when coal is carbonized in a retort, that escape as smoke when the same coal is burnt in an unsuitable manner for steam raising or in a domestic grate.

Coal may vary very greatly in composition. A flaming coal may contain 14 per cent. or more of water, whilst anthracite usually contains only say from 1 to 3 per cent. The flaming coal will also probably contain from 30 to 40 per cent. of volatile or gas and tar-forming matter, whilst anthracite. will seldom contain more than say 5 per cent. Between these two types there are, of course, many varieties and each requires its own peculiarities to be allowed for when it is used for industrial or, indeed, any other

Variations in Heat-value of Coal.

The heat yielded when these various coals are burnt' will also vary greatly and even when due allowance is made for the variable proportion of water and ash the pure "coal substance," as it is sometimes called, will vary very much in heating value. In every case the water in the fuel, whether that natural to it—the true moisture of dry-looking coal—or adventitious (and obvious) water must be evaporated. The hydrogen in the gas and tar-forming matter also yields a lot of water on burning—say 40 per cent, of the weight of the coal. The amount may seem enormous, but coal contains about 4 or 5 per cent, of hydrogen which -will combine with eight times its weight of oxygen to form water. All this water has to be evaporated. Three or four per cent. of the total heat of the coal may, in fact be spent in evaporating water inside the firebox.

Now coke is remarkably uniform as to the heating value of the "coke substance," as we may call it—the water-and-ash-free coke. The reason is not far to seek. It is fairly pure carbon, its relation to coal being similar to that of wood charcoal to wood. Also coke, unless obviously wet, will not usually contain much water, as it naturally absorhs but little from the air. It certainly will yield very little as a result of its combustion. In all respects, therefore, cokes from different coals and from different gasworks will be much more alike than, the coals from which they have been prepared. A few examples of the heating values of eight very different coals and of the cokes obtained from them will illustrate this. The results are shown in the following table.

The heating value of pure carbon is 14.500 and is used as a comparison figure. The cokes approximate fairly closely to this, the differences being due principally to varying ash content. Of course nothing that is done in gasworks will remove the ash from coal. If the coal contains a lot of ash, and many coals now sold contain as much as 20 per cent.—f our hundredweight of ash per ton of coal—the coke will .contain still more, but in the present state of things this cannot. be helped. A furnace constructed to burn gas coke will burn all gas cokes almost equally well, but the preference is usually to be given for steam raising purposes to coke from not too up-to-date gatworks. Large works with retort settings calculated to give very large yields of gas by carbonizing at very high temperatures yield a hard coke too. much like the product of coke-ovens which is made only for metallurgical purposes and which is rather difficult to keep burning without a forced draught. Coke." breeze" of the kind which has been taken from the cooler parts of the retorts and not the harder substance which is sometimes so called, is more easily combustible. This can sometimes be obtained and is suitable for many purposes.

Wherever there is a gasworks coke can be obtained, and the user has a fair idea of the kind of fuel he is going touse. At the present time the man who wants coal must take what he can get and risk its suitability for his purpose. It may even give trouble by being too good. I know of such a ease.