THE POSSIBILITIES OF THE PETROL LOCOMOTIVE. 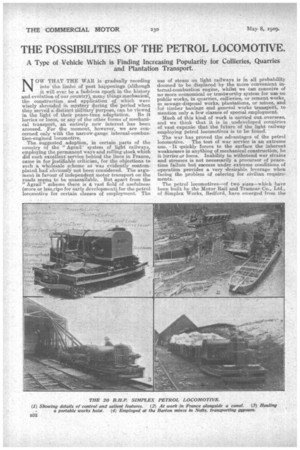 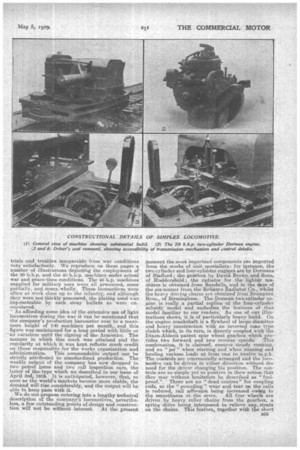 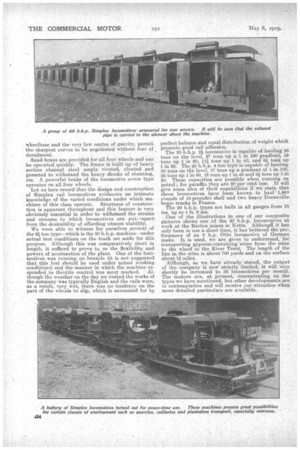 Page 10, 8th May 1919 — THE POSSIBILITIES OF THE PETROL LOCOMOTIVE.
Close
Noticed an error?
If you've noticed an error in this article please click here to report it so we can fix it.

A Type of Vehicle Which is Finding Increasing Popularity, for Collieries, Quarries and Plantation Transport.

Now THAT THE WAR is gradually receding into the limbo of past happenings (although it will ever be a fadeless epoch in the history and evolution of our country), many things mechanical, the construction and application of which were wisely shrouded in mystery during the period when they served a distinct military purpose, can be viewed in the light of their peace-time adaptation. Be it lorries or locos, or any of the other forms of mechanical transport, an entirely new interest has been aroused. For the moment, however, we are concerned only with the narrow-gauge internal-combustion-engined locomotive. The suggested adoption, in certain parts of the country of the P AgraiP system of light railways, employing the permanent ways and roilingstock which did such excellent service -behind the lines in France, came in for justifiable criticism, for the objections to such a wholesale scheme as was evidently contemplated had obviously not been considered. The argument in favour of independent motor transport on the roads seems to be unassailable. But apart from the " Agrall " scheme there is it vast field of usefulness (more or less.ripe for early development) for the petrol locomotive for certain classes of employment. The use of steam on light railways is in -all probability doomed to be displaced by the more convenient internal-combustion engine, whilst we can conceive of no more economical or trustworthy system for use Dfl public works, in quarries, collieries, Cr cement works, in sewage-disposal works, plantations, or mines, and foi timber haulage and general works tranBriort, to mention only a few classes of special employment.

Much of -this kind of work is carried out overseas, and we think that it is in undeveloped countries of vast expan'Ae that the future of the light railway employing petrol locomotives is to be found. '

The war has proved the advantages of the petrol locomotive.The test of war service is an extreme one. • It quickly forces to the surface the inherent weaknesses in anything of mechanical construction, be it lorries or locos. Inability to withstand war strains and stresses is not necessarily a precursor of peacetime failure but success under extreme conditions of operation provides a very desirable leverage when facing the problem of catering for civilian requirements.

The petrol locomotives--of two sizes—which have been built by the Motor Rail and Tramcar Co., Ltd., of Simplex Works, Bedford, have emerged from the

trials and troubles inseparable from war conditions very satisfa,ctorily. • We reproduce on these pages a number of illustrations depicting the employment of the 20 la.h.p. and the 40 b.h.p. machines under actual war and peace-time conditions. The 40 h.p.machines supplied for military uses were all armoured, some partially, and many wholly. These locomotives were often at work close up to the infantry, and although they were not thickly armoured, the plating used was impenetrable by such stray bullets as were enoountered.

As affording some idea of the extensive use of light locomotives during the war it can be mentioned that the company's production barometer rose to a maximum height of 100 machines per month, and this figure was maintained for a long period with little or no variation until the signing of the Armistice. The manner in which this mark was attained and the regularity at which it was kept reflects much credit on those responsible for the works -organization and administration. This commendable output can be strictly attributed to standardized production. The weekly output of the company has now dropped to two petrol locos and two rail inspection cars, the latter of thetype which we described in our issue of April 3ed, 1919. It is anticipated, however, that, so soon as the world's markets become more stable, the demand will rise considerably, and the output will be able to keep pace with it.

We do not propose entering into a lengthy technical description of the company's locomotives, nevertheless, a few outstanding points of design and construction will not be without interest. At the present

moment the most important components are imported from the works of unit specialists: for instance, the two-cylinder and four-cylinder engines are by Dorm-was of Stafford ; the gearbox by David Brown and Sons, of Huddersfield ; the radiator for the lighter machines is obtained from Randal's, and in the ciaae of the six-tonner from the Reliance Radiator .Co.,. whilst the heavy driving chains are obtained from Brampton Bros., of Birmingham. The Dorman two-cylinder engine is really a partial replica of the four-cylinder subsidy model and embodies the features of that model familiar to our readers: As one of our illustrations shows, it is of particularly heavy build. On the engine crankshaft is a. flywheel of largo diameter and heavy construction with an inverted cone type clutch which, in its turn, is directly coupled with the Dixon-Abbott patent spur wheel gearbox which pro:vides. two forward and two reverse speeds. ;This combination, it is claimed, ensuros steady running, and no " jar" when starting and when running and hauling various loads at from one to twelve m.p.h. The controls are conveniently arranged and the locomotive can be driven in either direction withoutthe need for the driver changing his position. The -controls Are so simple yet so positive in their action that they may without hesitation he described as "foolproof." There are no "dead centres" for coupling rods, so the " pounding " wear and tear osi the rails is reduced, rail adhesion being increased owing to

the smoothness ot the drive. All four wheel's are driven by heavy roller chains from the gearbox, a spring drive being interposed to: relieve any, strain on the chains. This feature, together with the short wheelbase and the very low centre of gravity, permit the sharpest curves to be negotiated without fear of derailment.

Sand boxes are provided for all four wheels and can be operated quickly. The frame is built up of heavy section channel steel amply riveted, cleated and gusseted to withstand the heavy shocks of shunting, etc. A powerful brake of the locomotive screw type operates on all four wheels.

Let us here record that the design and construction of Simplex rail locomotives evidences an intimate knowledge of the varied conditions under which machines of this class operate. Stoutness of construction is apparent throughout and this feature is very obviously essential in order 'to withstand the strains and stresses to which locomotives are put—apart from the desirability of affording utmost stability.

We were able to witness for ourselves several of the 24 ton type—which is the 20 b.h.p. maohine—under actual test conditions on the track set aside for this purpose. Although this was comparatively short in length, it sufficed to prove to us the flexibility and powers of acceleration of the plant. One of the locomotives was running on benzoic: (it is not suggested that this fuel should be used under actual working conditions) and the manner in which the machine responded to throttle control was most marked. Although the weather on the day we visited the works of the company was typically English and the rails were, as a result, very wet, there was no tendency on the parb of the wheels to slip, which is accounted for by perfect balance arid equal distribution of weight which promote good rail adhesion. The 20 b.h.p. 24 locomotive is capable of hauling 36 tons on the level, 27 tons up a 1 in 100 gradient, 19 tons up 1 in 60, 134 tons up 1 in 40, and 64 ton .s up 1 in 20. The 20 b.h.p. 44on type is capable of hauling 50 tons on the level, 37 tons up a gradient of 1 in 100, 26 tons up 1 in 60, 18 tons up 1 in 40 and si tons up 1 in 20. These capacities are possible when running on petrol ; for paraffin they are 20 per cent less. It will give some idea of their capabilities if we state that these locomotives have been known to haul 1,600 rounds of 18-pounder shell and two heavy Decauville bogie trucks in France. The 20 b.h.p. types are built in all gauges -from 18 ins, up to 4 ft. 8 ins: One of the illustrations in one of our composite pictures shows one of the 20 b.h.p. locomotives at work at the Barton mines in Notts. Although it has only been in use a short time, it has bettered the performance of an 8 h.p. Otto locomotive of German make. It is used, we are given to understand, for transporting gypsum-containing -stone front the mine. to the wharf at the River Trent. The length of the tine in the mine is about 700 yards and on the surface about 14 miles.

Although, as we have already stated, the output of the company is now strictly limited, it will very shortly be increased to 30 locomotives per month. The makers are, at present, concentrating on the types we have mentioned, but other developments are in contemplation and will receive our attention when more detailed particulars are available.