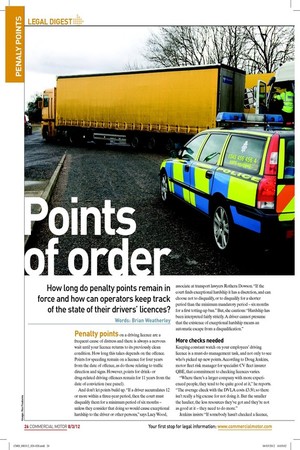 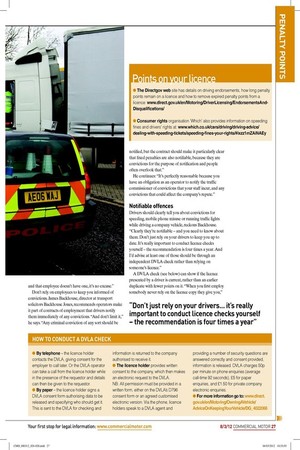 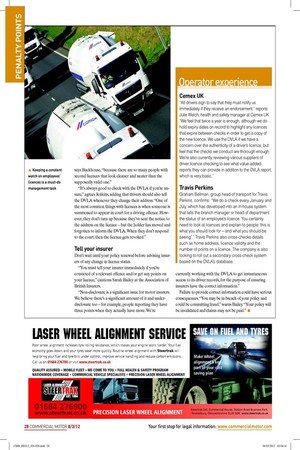 Page 17, 8th March 2012 — oints of order
Close
Noticed an error?
If you've noticed an error in this article please click here to report it so we can fix it.
Keywords : Transport, Department For Transport, Driver And Vehicle Licensing Agency, Traffic Law, Traffic Ticket, Driving Licence In The United Kingdom

How long do penalty points remain in force and how can operators keep track of the state of their drivers’ licences?

Penalty points on a driving licence are a frequent cause of distress and there is always a nervous wait until your licence returns to its previously clean condition. How long this takes depends on the offence. Points for speeding remain on a licence for four years from the date of offence, as do those relating to trafic direction and signs. However, points for drinkor drug-related driving offences remain for 11 years from the date of conviction (see panel).

And don’t let points build up. “If a driver accumulates 12 or more within a three-year period, then the court must disqualify them for a minimum period of six months – unless they consider that doing so would cause exceptional hardship to the driver or other persons,” says Lucy Wood, associate at transport lawyers Rothera Dowson. “If the court inds exceptional hardship it has a discretion, and can choose not to disqualify, or to disqualify for a shorter period than the minimum mandatory period – six months for a irst totting-up ban.” But, she cautions: “Hardship has been interpreted fairly strictly. A driver cannot presume that the existence of exceptional hardship means an automatic escape from a disqualiication.”

Keeping constant watch on your employees’ driving licence is a must-do management task, and not only to see who’s picked up new points. According to Doug Jenkins, motor leet risk manager for specialist CV leet insurer QBE, that commitment to checking licences varies.

“Where there’s a larger company with more experienced people, they tend to be quite good at it,” he reports. “The average check with the DVLA costs £3.50, so there isn’t really a big excuse for not doing it. But the smaller the haulier, the less resources they’ve got and they’re not as good at it – they need to do more.” Jenkins insists: “If somebody hasn’t checked a licence, and that employee doesn’t have one, it’s no excuse.” Don’t rely on employees to keep you informed of convictions. James Backhouse, director at transport solicitors Backhouse Jones, recommends operators make it part of contracts of employment that drivers notify them immediately of any convictions. “And don’t limit it,” he says. “Any criminal conviction of any sort should be notiied, but the contract should make it particularly clear that ixed penalties are also notiiable, because they are convictions for the purpose of notiication and people often overlook that.” He continues: “It’s perfectly reasonable because you have an obligation as an operator to notify the trafic commissioner of convictions that your staff incur, and any convictions that could affect the company’s repute.”

Drivers should clearly tell you about convictions for speeding, mobile phone misuse or running trafic lights while driving a company vehicle, reckons Backhouse. “Clearly they’re notiiable – and you need to know about them. Don’t just rely on your drivers to keep you up to date. It’s really important to conduct licence checks yourself – the recommendation is four times a year. And I’d advise at least one of those should be through an independent DVLA check rather than relying on someone’s licence.” A DVLA check (see below) can show if the licence presented by a driver is current, rather than an earlier duplicate with fewer points on it. “When you irst employ somebody never rely on the licence copy they give you,” says Backhouse, “because there are so many people with second licences that look cleaner and neater than the supposedly valid one.” “It’s always good to check with the DVLA if you’re unsure,” agrees Jenkins, adding that drivers should also tell the DVLA whenever they change their address. “One of the most common things with licences is when someone is summoned to appear in court for a driving offence. However, they don’t turn up because they’ve sent the notice to the address on the licence – but the holder has moved and forgotten to inform the DVLA. When they don’t respond to the court, then the licence gets revoked.”

Don’t wait until your policy renewal before advising insurers of any change in licence status.

“You must tell your insurer immediately if you’re convicted of a relevant offence and/or get any points on your licence,” cautions Sarah Bailey at the Association of British Insurers.

“Non-disclosure is a signiicant issue for motor insurers. We believe there’s a signiicant amount of it and underdisclosure too – for example, people reporting they have three points when they actually have more. We’re currently working with the DVLA to get instantaneous access to its driver records, for the purpose of ensuring insurers have the correct information.”

Failure to provide correct information could have serious consequences. “You may be in breach of your policy and could be committing fraud,” warns Bailey. “Your policy will be invalidated and claims may not be paid.” n

Points on your licence

• The Directgov web site has details on driving endorsements, how long penalty points remain on a licence and how to remove expired penalty points from a licence: www.direct.gov.uk/en/Motoring/DriverLicensing/EndorsementsAndDisqualiワcations/

“All drivers sign to say that they must notify us immediately if they receive an endorsement,” reports Julie Welch, health and safety manager at Cemex UK. “We feel that twice a year is enough, although we do hold expiry dates on record to highlight any licences that expire between checks in order to get a copy of the new licence. We use the DVLA if we have a concern over the authenticity of a driver’s licence, but feel that the checks we conduct are thorough enough. We’re also currently reviewing various suppliers of driver licence checking to see what value-added reports they can provide in addition to the DVLA report, which is very basic.”

Graham Bellman, group head of transport for Travis Perkins, confirms: “We do a check every January and July, which has developed into an in-house system that tells the branch manager or head of department the status of an employee’s licence. You certainly need to look at licences and explain to people ‘this is what you should look for – and what you should be seeing’.” Travis Perkins also cross-checks details such as home address, licence validity and the number of points on a licence. The company is also looking to roll out a secondary cross-check system based on the DVLA’s database.

HOW TO CONDUCT A DVLA CHECK

• By paper – the licence holder signs a DVLA consent form authorising data to be released and specifying who should get it. This is sent to the DVLA for checking and information is returned to the company authorised to receive it.

• The licence holder provides written consent to the company, which then makes an electronic request to the DVLA. NB: All permission must be provided in a written form, either on the DVLA’s D796 consent form or an agreed customised electronic version. Via the phone, licence holders speak to a DVLA agent and providing a number of security questions are answered correctly and consent provided, information is released. DVLA charges 50p per minute on phone enquiries (average call-time 92 seconds), £5 for paper enquiries, and £1.50 for private company electronic enquiries.