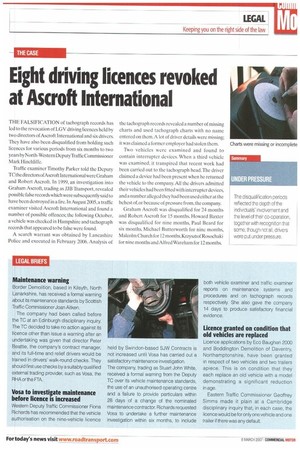 Border Demolition, based in Kilsyth, North Lanarkshire, has received a formal warning about its maintenance standards by Scottish Traffic Commissioner Joan Aitken.

The company had been called before the TC at an Edinburgh disciplinary inquiry. The TC decided to take no action against its licence other than issue a warning after an undertaking was given that director Peter Beattie, the company's contract manager, and its full-time and relief drivers would be trained in drivers' walk-round checks. They should first use checks by a suitably qualified external trading provider, such as Vosa, the Rt-IA or the ETA.

Vosa to investigate maintenance before licence is increased

Western Deputy Traffic Commissioner Fiona Richards has recommended that the vehicle authorisation on the nine-vehicle licence held by Swindon-based SJW Contracts is not increased until Vasa has carried out a satisfactory maintenance investigation.

The company, trading as Stuart John White, received a formal warning from the Deputy TC over its vehicle maintenance standards, the use of an unauthorised operating centre and a failure to provide particulars within 28 days of a change of the nominated maintenance contractor. Richards requested Vosa to undertake a further maintenance investigation within six months, to include both vehicle examiner and traffic examiner reports on maintenance systems and procedures and on tachograph records respectively. She also gave the company 14 days to produce satisfactory financial evidence.

Licence granted on condition that old vehicles are replaced

Licence applications by Eco Baughan 2000 and Boddington Demolition of Daventry, Northamptonshire, have been granted in respect of two vehicles and two trailers apiece. This is on condition that they each replace an old vehicle with a model demonstrating a significant reduction in age.

Eastern Traffic Commissioner Geoffrey Simms made it plain at a Cambridge disciplinary inquiry that, in each case, the licence would be for only one vehicle and one trailer if there was any default.