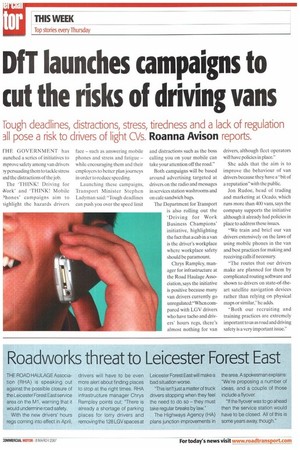 THE ROAD HAULAGE Association (RHA) is speaking out against the possible closure of the Leicester Forest East service area on the MI, warning that it would undermine road safety.

With the new drivers hours regs coming into effect in April, drivers will have to be even more alert about finding places to stop at the right times. RHA infrastructure manager Chrys Rampley points out: "There is already a shortage of parking places for lorry drivers and removing the 128 LGV spaces at Leicester Forest East will make a bad situation worse.

"This isn't just a matter of truck drivers stopping when they feel the need to do so — they must take regular breaks by law."

The Highways Agency (HA) plans junction improvements in the area. A spokesman explains; "We're proposing a number of ideas, and a couple of those include a flyover.

"If the flyover was to go ahead then the service station would have to be closed. All of this is some years away, though."