IMPORTANT ITEMS OF THE PAST WEEK . 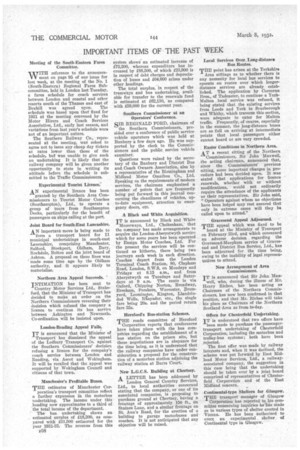 Page 116, 8th March 1932 — IMPORTANT ITEMS OF THE PAST WEEK .
Close
Noticed an error?
If you've noticed an error in this article please click here to report it so we can fix it.
Keywords : Perth, Scotland, Stagecoach Group, Nottingham Corporation Tramways

Meeting of the South-Eastern Fares Committee.

WITH reference to the announcement on page 95 of our issue for last week, at the meeting of the No. 1 (South-Eastern) Regional Fares Subcommittee, held in London last Tuesday, a fares schedule for coach services between London and coastal and other resorts south of the Thames and east of Bexhill was agreed upon. The schedule was based upon that fixed for 1931 at the meeting convened by the Motor Hirers and Coach Services Association, Ltd., early last season, awl variations from last year's schedule were not of an important nature.

The Southern Railway Co., represented at the meeting, waA asked to agree not to issue any cheap day tickets at rates lower than those of the schedule, but was unable to give such an undertaking It is likely that the railway company will be given another opportunity to state in writing its attitude before the schedule is submitted to the Traffic Commissioners.

AN experimental licence has been granted by the Southern Area Commissioners to Tourist Motor Coaches (Southampton), Ltd., to operate a group of tours from Southampton Docks, particularly for the benefit of passengers on ships calling at the port.

Joint Board for South-East Lancashire.

AN important move is being made to

form a transport board for 11 municipal undertakings in south-east Lancashire, comprising Manchester, Salford, Stockport, Oldham, Bury, Rochdale, Bolton and the joint board of Ashton. A proposal on these lines was made some time ago by the Oldham authority, and it appears likely to materialize.

INTIMATION has been sent to Country Motor Services Ltd., Stakeford, that the Minister of Transport has decided to make an order on the Northern Commissioners reversing their decision which refused the company a licence to continue its bus service. between Ashington and Newcastle. Co-ordination will be insisted upon.

IT is announced that the Minister of Transport has dismissed the appeal of the Ledbury Transport Co. against the Southern Commissioners' decision refusing a licence for the company's coach service between London and Reading, via Ascot and Wokingham. It will be recalled that the appeal was supported by Wokingham Council and citizen of that town.

THE estimates of Manchester Corporation's transport committee reflect a further expansion in the motorbus undertaking. The income under this heading now approximates to a third of the total income of the department. The bus undertaking shows an -estimated surplus of £18,200, as compared with £31,500 estimated for the year 1931-32. The revenue from this P58 system shows an estimated increase of £75,200, whereas expenditure has increased by £88.500, of which £23,900 is in respect of debt charges and depreciation of buses and £64,600 arises under other headings.

The total surplus, in respect of the tramways and bus undertaking, available for transfer to the renewals fund is estimated at £62,130, as compared with £59,000 for the current year.

Southern Commissioner at an Operators' Conference.

Questions were raised by the secretary of the Banbury and District Bus and Coach Owners Association, also by a representative of the Birmingham and Midland Motor Omnibus Co., Ltd. Speaking on the requirements of modern services, the chairman emphasized a number of points that are frequently being put forward in this journal concerning the cleanliness of vehicles, upto-date equipment, attention to emergency doors, etc.

A Black and White Acquisition.

IT is announced by Black and White Motorways, Ltd., Cheltenham, that the cAnpany has made arrangements to acquire the London-Aberystwyth service which for some years has been operated by Ensign Motor Coaches, Ltd. For the present the services will be continued as hitherto, there being two journeys each week in each direction. Coaches depart from the London Terminal Coach Station, 80, Clapham Road, London, S.W.9, on Mondays and Fridays at 8.15 a.m., and from Aberystwyth on Tuesdays and Saturdays at 9 a.m. The route is via Oxford, Chipping Norton, Broadway, Evesham, Pershore, Worcester, Bromyard, Leominster, Kington, Llandrindod Wells, Rhayader, etc., the single fare being 20s. and the period return fare 35s.

TEE roads committee of Hereford Corporation reports that conferences have taken place with the bus companies regarding the establishment of a bus station on the prison site, but these negotiations are in abeyance for the time being, as it is understood that the railway companies have under consideration a proposal for the construction of a motorbus station adjoining the railway station at Bans Court.

A_ LETTER has been addressed by London General Country Services, Ltd., to local authorities concerned stating that the company, or one of its associated companies, is proposing to purchase ground at Chertsey, having a frontage of approximately 150 ft., on Staines Lane, and a similar frontage on St. Ann's Road, for the erection of a building to garage motorbuses and coaches. It id not anticipated that any objection will be raised. Local Services Over. Long-distance Bus Routes.

point has arisen at the Yorkshire Area sittings as to whether there is any necessity for local bus services to operate on routes over which longerdistance services are already established. The application by Corcoran Bros., of Tadcaster, to continue a YorkMahon local service was refused, it being stated that the existing services from Leeds and York to Scarborough and Whitby, which traverse this section, were adequate to cater for Melton traffic. Frequently, of course, especially in the summer, the long-distance buses are so full on arriving at intermediate points that local passengers either cannot board or are very crowded.

Easier Conditions in Northern Area. AT a recent sitting of the Northern Commissioners, Sir John Maxwell, the acting chairman, announced that, since the Commissioners' previous sitting, some important changesin procedure had been decided upon. It was stated that applications for licence renewals, whether with " or without modifications, would not ordinarily require the attendance of the applicants or their representatives. Sir .fohn said, " Operators against whom no objections have been lodged may rest assured that only in extreme cases will they be called upon to attend."

ECE appeal which was fixed to be heard at the Ministry of Transport on February 23rd, and which concerned an adverse decision regarding the Gravesend-Meopham service of Gravesend and District Bus Service, Ltd., has been adjourned for the time being, owing to the inability of legal representatives to attend.

Offers for Chesterfield Undertaking. IT is understood that two offers have been made to purchase the passengertransport undertaking of Chesterfield Corporation, including the motorbus and trolley-bus systems; both have been • rejected.

The first offer was made by railway interests and, when it was declined, the scheme was put forward by East Midland Motor Services, Ltd., a railwayassociated company, the suggestion in this case being that the undertaking should be taken over by a joint board comprised of representatives of Chesterfield Corporation and of the East Midland concern.

Continental-type Shelters for Glasgow. THE transport manager of Glasgow Corporation has reported to his committee concerning inquiries he has made as to various types of shelter erected in .Vienna. He has been authorized to erect an experimental shelter of Continental type in Glasgow. '