• Last week's debate on road safety and tyres in 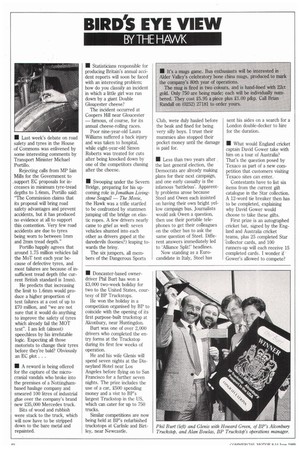 the House of Commons was enlivened by some interesting comments by Transport Minister Michael Portillo.

Rejecting calls from MP lain Mills for the Government to /support EC proposals for increases in minimum tyre-tread depths to 1.6mm, Portal° said: "The Commission claims that its proposal will bring road safety advantages and prevent accidents, but it has produced no evidence at all to support this contention. Very few road accidents are due to tyres being worn to between 1mm and 2mm tread depth."

PortiIto happily agrees that around 1.75 million vehicles fail the MoT test each year because of defective tyres, and most failures are because of insufficient tread depth (the current British standard is lmm).

He predicts that increasing the limit to 1.6mm would produce a higher proportion of test failures at a cost of up to 270 million, and "we are not sure that it would do anything to improve the safety of tyres which already fail the MOT test". I am left (almost) speechless by his irrefutable logic. Expecting all those motorists to change their tyres before they're bald? Obviously an EC plot