THE ROYAL COUNTIES SHOW AT READING. 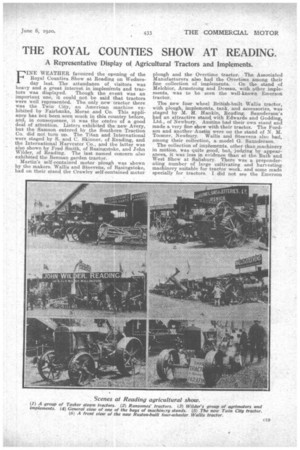 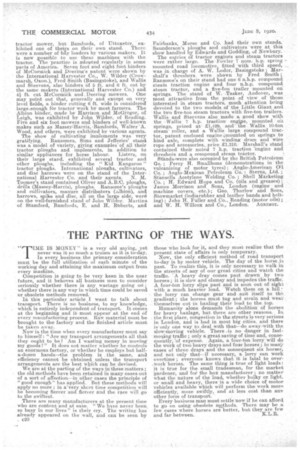 A Representative Display of Agricultural Tractors and Implements.

FINE 'WEATHER favoured the opening of the Royal Counties Show at Reading on Wednesday last. The attendance of visitors was heavy and a great interest in implenients and tractors was displayed. Though the event was an important one, it could not be said that tractors were well represented. The only new tractor there was the Twin City, an American machine exhibited by Fairbanks, Morse and Co. This appliance has not been seen much in this country betore, and, in consequence, it was the centre of a good deal of attention. Listers exhibited the new Avery, but the Samson entered by the Southern Traction Co. did not turn up. The Titan and International were staged by S. and C. Skinner, of Reading, and the International Harvester Co., and the latter was also shown by Fred Smith, of Basingstoke, and John Wilder, of Reading. The last named concern also exhibited the Beeman garden tractor.

Martin's self-contained motor plough was shown by the makers. Wallis and Steevena, of Basingstoke, had on their stand the Crawley self-contained motor plough and the Overtime tractor. The Associated Manufacturers also had the Overtime among their fine collection of implements. On the stand of Mekhior, Armstrong and Dessau, with other implements, was to be seen the well-known Emerson tractor.

The new four wheel British-built Wallis tractor, with plough, implements, tank, and accessories, was staged by M. H. nankin, Reading. Saunderson's had. an attractive stand, with Edwards and Godding, Ltd., of Newbury. Austins had their own stand and made a very fine show with their tractor.. The Fordson and another Austin were on the stand of N. M. Toomer, Newbury. Wallis and Steevens also had, among their collection, a model G. Saunderson.

The collection of implements, other than machinery in motion, was quite good, but, judging by appearances, it was less in evidence than at the Bath and West Show at Salisbury. There was a preponderating number of large cultivating and harvesting machinery suitable for tractor work, and some made specially for tractors. I did not see the Emerson

tractor mower, but liamfords, of Uttoxeter, exhibited one of theirs on their own stand. There were a number of .h-Ay loaders by various makers. It is now possible to use these machines with the tractor. The practice is adopted regularly in some parts of America. Seven foot and eight foot binders of McCormick and Deering's patent were shown by the International Harvester Co., W. Wilder (Crowmarsh, Oxon.), Fred Smith (Basingstoke), and Wallis and Steevens, also binders Of 5 ft. and 6 ft. cut by the same makers (International Harvester Co.) and ft. cut McCormiek and. Deering mowers_ One may point out that, generally and except on very level fields, •a binder cutting 6 ft. wide is considered large.enough for tractor work by most farmers. The Albion binder, made by Harrison. and McGregor, of Leigh, was exhibited by John Wilder, of Reading. Five and six foot mowers and binders of well-h.:intim makes such as Massey:Harris, ,Barnfords, Walter 'A. Wood, and others, were exhibited by various agents.

The show of liultivating implements was very

gratifying. Ransomes, Sims and Jefferies' stand was a Model of variety, giving examplesof all their tractor ploughs and implements, in . addition to

similar appliances for horse labour. Listers, on their large stand, exhibited several tractor and other ploughs, including the "Kid Kangaroo" tractor ploughs. International ploughs, cultivators, and disc harrows were on the stand of the International Harvester Co. and their agents. N. M. Toomer's stand contained Oliver and A.B.C. ploughs, drills (Massey-Harris), ploughs. Ransoine's ploughs and cultivators, manure distributors (eilbion), ancl harrows, spike and disc, all on the large side, werd on the well-furnished stand of John Wilder. Martina of Stamford, Bamfords, E. and H. Rbberts, and

Fairbanks, Morse and Co. had their own stands. Saunderson's ploughs and cultivators were at this show handled by Edwards and Godding, of Newbury. The entries of tractor engines and steam tractors were rather large. The Foaler 7 nom. h.p. spring mounted road locomotive, fitted with third speed, was in charge of A. W. Loder, Basingstoke; Marshall's threshers were shown by Fred Smith ; Ransome's on their stand had one 6 n.h.p. compound steam traction engine and four n.h.p. compound steam tractor, and a five-ton trailer mounted on aprings. The stand of W. .Tasker, Andover, was most attractive from the point of view of those interested in steam tractors, much attention being devoted to the two models of the Little Giant and the two five-ton steam tractors with five-ton trailers. Wallis and Steevene also made a good show with the ,Wallis 7 h.p. traction engine, mounted o'si springs, priced at £1,429, and the Wallis 10-ton steamroller, and a. Wallis large compound tractor, patent enclosed engine ;mounted on springs to hind axle, complete with winding drum and wire rope and accessories, price £1,310. Marshall's stand contaiued their noted 7 lap. traction engine and threshers and a compound steam tractor.