BTAC trial for AutoShift and Ma II by Tim Blakemore 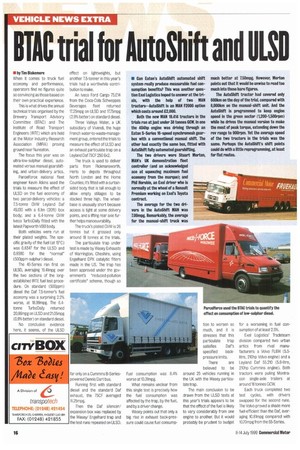 When it comes to truck fuel economy and performance, operators find no figures quite so convincing as those based on their own practical experience.

This is what drives the annual technical trials organised by the Brewery Transport Advisory Committee (BTAC) and The Institute of Road Transport Engineers (IRTE) which are held at the Motor Industry Research Association (MIRA) proving ground near Nuneaton.

The focus this year was on ultra-low-sulphur diesel, automated versus manual gearshifting, and urban-delivery artics.

No conclusive evidence here, it seems, of the ULSD effect on lightweights, but another 7.5-tanner in this year's trials had a worthwhile contribution to make.

Three Valleys Water, a UK subsidiary of Vivendi, the huge French water-to-waste-management group, entered the trials to measure the effect of ULSD and an exhaust particulate trap on a Leyland Daf 75CF 250 5x2.

The truck is used to deliver parts from Rickmansworth, Herts to depots throughout North London and the Home Counties; it's fitted with a curtainsided body that is tall enough to allow empty stillages to be stacked three high. The wheelbase is unusually short because access is tight at some delivery points, and a lifting rear axle further helps manoeuvrability The truck's plated GVW is 26 tonnes but it grossed only around 18 tonnes at the trials.

The particulate trap under test is made by Wasey Exhausts of Warrington, Cheshire, using Engelhard DPX catalytic fitters made in the US. The trap has been approved under the government's "reduced-pollution certificate" scheme, though so far only on a Cummins B-Seriespowered Dennis Dart bus.

Then the Daf silencer/ expansion box was replaced by the Wasey/ Engelhard trap and the test runs repeated on ULSD. Fuel consumption was 8.4% worse at 10.31mpg.

What remains unclear from this single test is precisely how the fuel consumption was affected by the trap, by the fuel, and by a driver change.

tion to worsen so much, and it is stresses that this particulate trap satisfies Oaf's specified back pressure limits.

There are believed to be around 25 vehicles running in the UK with the Wasey particulate trap.

The main conclusion to be drawn from the ULSD tests at this year's trials appears to be that the effect of the fuel is likely to vary considerably from one engine to another. But it would probably be prudent to budget for a worsening In fuel consumption of at least 2.5%.

Each truck completed two test cycles, with drivers swapped for the second runs. The Volvo proved a shade more fuel-efficient than the Daf, averaging 10,81mpg compared with 10.70mpg from the 55-Series.