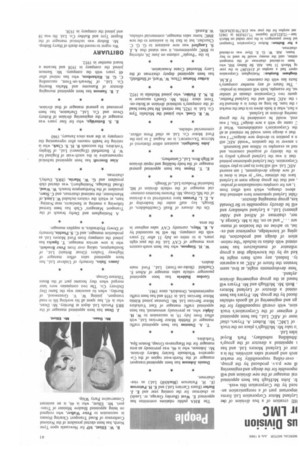 Dennis Johnson has been appointed transport manager of the North-west region of the Cooperative Wholesale Society bakery division. Mr. Johnson, who is 46, was previously an area manager for the Hargreaves Group, Boston Spa, Yorkshire.

W. H. Simpson, who has been south-eastern area manager of CAV Ltd. for the past eight years, is to retire on July 31 after 32 years with the company. He will be succeeded by A. R. Mays, currently CAV sales engineer in the area.

On the closure of Reall Coachbuilders. of Slough, key staff under the leadership of A. E. L. Parsons have transferred to a division of the ML Group. Mr. Parsons becomes commercial manager of the vehicle division of ML Industrial Products Ltd., of Slough.

E. T. Hoyes has been appointed general manager of the body-building and repair division at Bligh Bros. Ltd., Canterbury.

In the -People" column on June 24, referring to BMC appointments, it was stated that A. J. S. Langford was now assistant to G. G. C. Churcher, but in fact he is assistant to the new BMC home sales manager, commercial vehicles. W. Rastall. R. W. Elliott, MP for Newcastle upon Tyne North, has been elected president of the National Conference of Road Transport Clearing Houses in succession to Peter Walker, who resigned on being appointed Shadow Minister of Transport. Mr. Elliott, who is 46, is an assistant Conservative Party Whip.

J. Dean has been appointed manager of the BRS Parcels Ltd. depot at Burnley. Mr. Dean, who is 45, has spent all his working life in road transport. joining W. V. Greenwood, of Burnley, when its associate was the Same Day Delivery Co. The two companies were later merged when they became part of the Bouts Tillotson Group.

A Nottingham and Derby branch of the Transport Managers' Club has been formed following a meeting at Sandiacre, near Nottingham, at which the visitors included W. Lloyd, of Manchester, the national chairman, and C. Starr, president of the Northampton branch. W. Wood, (Road Haulage, Nottingham), was elected club president and G. W. Martin, (BRS, Derby), chairman.

Alan Beecroll has been appointed technical representative in the south-west of England for W. P. Butterfield (Engineers) Ltd.. of Shipley Yorkshire. He succeeds R. H. S. Clark, who is retiring for health reasons after representing the company in the area since January, 1960 R. S. Betteridge, who for four years was manager of the engineering division of Rubery Owen and Co. Ltd., Darlaston, has been promoted to general manager of that division.

J. B. Samson has been appointed managing director of Ransome and Marles Bearing Co. Ltd.. of Newark-on-Trent, succeeding C. G. H. Richardson, who has retired after 48 years with the company. Mr. Samson joined the company in 1938 and became a board member in 1952.