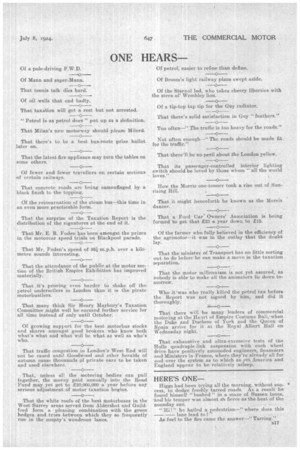 Page 3, 8th July 1924 — ONE HEARS
Close
Noticed an error?
If you've noticed an error in this article please click here to report it so we can fix it.
Keywords : Transport, Private Transport, Automotive Industry By Country, Foden, Tax, Fuel Tax, Mini

Of oil .wells that end badly.

That taxation will get a rest but not arrested.

"Petrol is as petrol does" put up as a definition.

That there's to be a best bus-route prize ballot later on.

That the latest fire appliance may turn the tables on some others.

Of fewer and fewer travellers on certain sections of certain railways.

That concrete roads are being camouflaged by a black finish to the topping.

Of the reincarnation of the steam bus—this time in an even more practicable form.

That the surprise of the Taxation Report is the distribution of the signatures at the end of it.

That Mr. E. R. Foden has been amongst the prizes in the motorcar speed trials on Blackpool parade.

. That Mr. Foden's speed of 561 m.p.h. over a kilometre sounds interesting.

That the attendance of the public at the motor section of the British Empire Exhibition has improved materially.

That it's proving even harder to shake off the petrol undersellers in London than it is the pirate motorbustlers.

That many think Sir Henry Maybury's Taxation Committee might well be excused further service for all time instead of only until October, Of growing support for the best motorbus stocks and shares amongst good brokers who know both what's what and what will be what as well as who's who.

That traffic congestion in London's West End will not be eased until Goodwood and other heralds of autumn cause thousands of private cars to be taken and used elsewhere.

That, unless all the motoring bodies can pull together, the money paid annually into the Road • Fund may yet get to £20,000,000 a year before any serious adjustment of motor taxation begins.

That the white roofs of the best motorbuses in the West Surrey areas served from Aldershot and Guildford form a pleasing combination with the green hedges and trees between which they so frequently • run in the county's wondrous lanes. Of petrol, easier to refine than define.

Of the Sternol lad, who takes cheery liberties with the stern al' Wembley lion.

Of a tip-top tap tip for the Guy radiator.

Too often—" The traffic is too heavy for the roads."

Not ften enough—" The roads should be made fit for the traffic."

That there'll be no peril about the London yellow.

That its passenger-controlled interior lighting switch should be loved by those whom "all the world loves."

How the Morris one-tonner took a rise out of Sunrising Hill.

That it might henceforth be known as the Morris dancer.

That a Ford Car' Owners' Association is being formed to get that 223 a year down to 215.

Of the farmer who fully believed in the efficiency of the agrimotor—it was in the outlay that the doubt lay.

That the minister of Transport has no little sorting out to do before he can make a move in the taxation separation.

That the motor millennium is not yet assured, as nobody is able to make all the animators lie down tomorrow.

Who it 'was who really killed the petrol tax before the Report was not signed by him, and did it thoroughly.

That there will be many leaders of commercial motoring at the Heart of Empire Costume Ball,-when the Duke And Duchess of York and the Queen of Spain arrive for it at the Royal Albert Hall on Wednesday night.

That exhaustive and ultra-excessive tests of the Rolle quadruple-link suspension with each wheel drive have positively astounded engineers, financiers and Ministers in France, where they're already all for and over the system as to which as yet America and England appear to be relatively asleep.