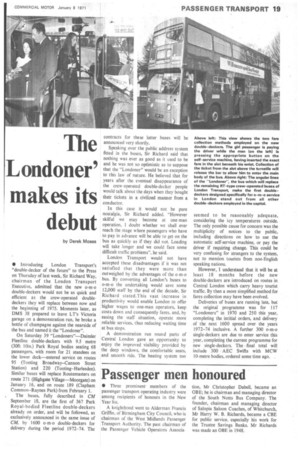 • Three prominent. members of the passenger transport operating industry were among recipients of honours in the New Year list.

A knighthood went to Alderman Francis Griffin, of Birmingham City Council, who. is chairman of the West Midlands Passenger Transport Authority. The past chairman of the Passenger Vehicle Operators Associa don, Mr Christopher Dabell, became an OBE; he is chairman and managing director of the South Notts Bus Company. The founder, chairman and managing director of Salopia Saloon Coaches, of Whitchurch, Mr Harry W. B. Richards, became a CBE for public service, especially his work for the Trustee Savings Banks. Mr Richards was made an OBE in 1948.