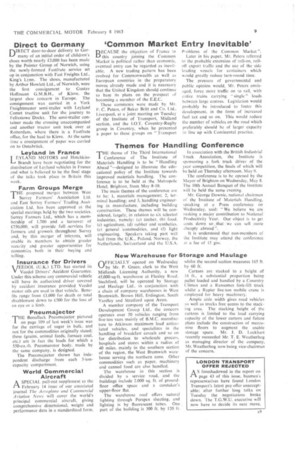 Page 11, 8th February 1963 — 'Common Market Entry Inevitable'
Close
Noticed an error?
If you've noticed an error in this article please click here to report it so we can fix it.

BECAUSE the objection of France to I-) this country joining the Common Market is political rather than economic, eventual entry can be regarded as inevitable. A new trading pattern has been evolved for Commonwealth as well as European countries in the preparatory moves already made and it is necessary that the United Kingdom should continue to base its plans on the prospect of becoming a member of the E.E.C.

These comments were made by Mr. R C. Peters, of Baker Britt and Co. Ltd., Liverpool, at a joint meeting on Tuesday of the Institute of Transport, Midland section. and the I.O.T. Coventry-Rugby group in Coventry, when he presented a paper to these groups on "Transport Problems of the Common Market ".

Later in his paper, Mr. Peters referred to the probable extension of roll-on, rolloff export traffic and the use of the side loading vessels for containers which would greatly reduce turn-round time.

The pressure of governmental and public opinion would, Mr. Peters envisaged, force more traffic on to rail, with entire trains carrying " single " loads between large centres. Legislation would probably be introduced to foster this development, in the form of increased fuel tax and so on, This would reduce the number of vehicles on the road which preferably should be of larger capacity to line up with Continental practice.