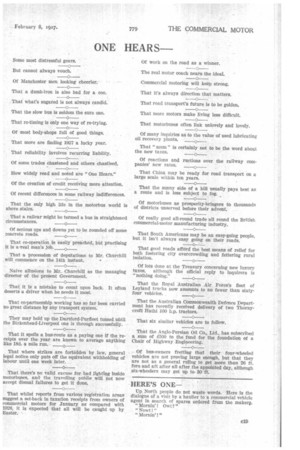 Page 85, 8th February 1927 — ONE HEARS
Close
Noticed an error?
If you've noticed an error in this article please click here to report it so we can fix it.
Keywords : Bus

Some most distressful gears. But cannot always vouch.

That a. dumb-iron is also bad for a coo.

That what's sugared is not always candid.

That the slow bus is seldom the sure one.

That re-timing is only one way of re-trying.

Of most body-shops full of good things.

That more are finding 1927 a lucky year.

Of some trades chastened and others chastised.

How widely read and noted are "One Hears."

Of the creation of credit receiving more attention.

Of recent differences in some railway indifferences.

That the only high life in the motorbus world is above stairs. 0 That a railcar might be termed a bus in straightened circumstances.

Of serious ups and downs yet to.be rounded off some concrete roads. 0 That co-operation is easily preached,. but practising it is aereal man's job. 0 That a procession of deputations to Mr. Churchill . will _commence on the 14th instant. • Naive allusions to Mr. Churchill as the managing director of the present Government.

That it is a mistake to count upon luck. It often deserts a driver when he needs it most.

That co-partnership working has so far been carried no great distance by any transport system.

They may hold up the Dartford-Purfieet tunnel until the Birkenhead-Liverpool one is through successfully.

That it spoils a bus-route as a paying one if the receipts over the year are known to average anything like 18d. a mile run.

That where strikes are forbidden by law, general legal notice only puts off the equivalent withholding of labour until one week later.

_That there's no valid excuse for bad lighting inside motorbuses, and. the travelling public will not now accept dismal failures to get it done.

That whilst reports from various registration areas suggest a set-back in taxation receipts from owners of commercial motors for January as compared with 1926, it is expected that all will be caught up by Easter.'-. Of Of work on the road as a winner.

That it's always direction that matters.

That road transport's future is to be golden.

Of many inquiries as to the value of used lubricating oil recovery plants. 0 That " mum " is certainly not to be the word about the new taxes. 0 Of reactions and ructions over the railway com panies' new rates.

That China may be ready for road transport on a large scale within ten years.

That the sunny side of a hill usually pays best as a route and is less subject to fog.

Of motorbuses as prosperity-bringers to thousands of districts unserved before their advent.

Of really good all-round trade all round the British commercial-motor manufacturing industry.

That South Americans may be an easy-going people, but it Isn't always easy going on their roads.

That good roads affcird the best means of relief for both fostering city overcrowding and fettering rural isolation.

Of lots done at the Treasury concerning new luxury taxes, although the official reply to inquirers is "nothing doing."

That the Royal Australian Air Force's fleet of Leyland trucks now amounts to no fewer than sixtyfour vehicles.

That the Anglo-Persian Oil Co., Ltd., has subscribed a sum of £500 to the fund for the foundation of a Chair of Highway .Engineering.

Of bus-owners fretting that their four-wheeled vehicles are not proving large enough, but that they are not as a general ruling to get more than 26 ft. fore and aft after all after the appointed day, although six-wheelers may get up to 30 ft.