Ford is fastest tipper so far 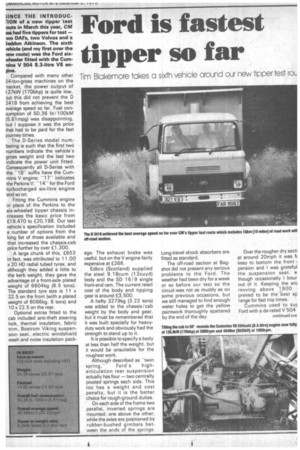 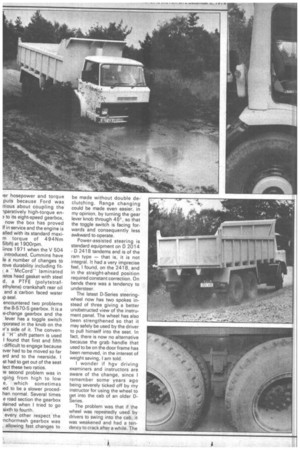 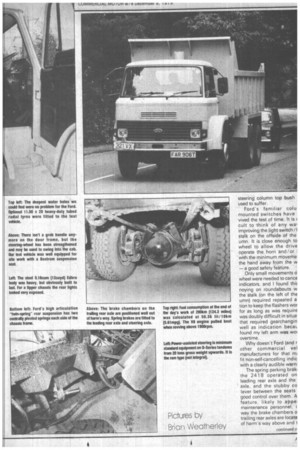 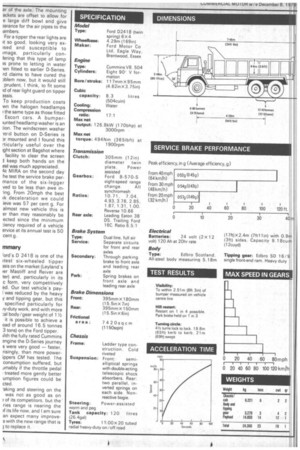 :INCE THE INTRODUCTION of a new tipper test curie in March this year. CM las had five tippers for test — wo DAFs, two Volvos and a ;eddon Atkinson. The sixth rehicle (and my first over the lew route) was the Ford sixArheeler fitted with the Cumnins V 504 8.3-litre V8 enOne.

Compared with many other 24-ton-gross machines on the Tiarket, the power output of 127kW (170bhp) is quite low, out this did not prevent the D 2418 from achieving the best average speed so far. Fuel consumption of 50.36 lit /100kM (5.61mpg) was disappointing, but I suppose it was the price that had to be paid for the fast journey times.

The D-Series model numbering is such that the first two numbers indicate the vehicle's gross weight and the last two indicate the power unit fitted. Consequently all 0-Series with the "18" suffix have the Cummins V engine; "17" indicates the Perkins V; "14" for the Ford turbocharged six-litre engine and so on.

Fitting the Cummins engine in place of the Perkins to the six-wheeled tipper chassis increases the basic price from £19,470 to £20,198. Our test vehicle's specification included a number of options from the long list of those available and that increased the chassis-cab price further by over £1,300.

age. The exhaust brake was useful, but on the V engine fairly expensive at £266.

A hefty 3279kg (3.22 tons) was added to the chassis/cab weight by the body and gear, but it must be remembered that it was built specially for heavyduty work and obviously had the strength to stand up to it.

It is possible to specify a body at less than half the weight, but it would be unsuitable for the roughest work.

Although described as "twin

spring," Ford's higharticulation rear suspension actually has four — two centrally pivoted springs each side. This too has a weight and cost penalty, but it is the better choice for rough-ground duties.

On each side of the frame two parallel, inverted springs are mounted; one above the other; while the axles are positioned by rubber-bushed gimbals between the ends of the springs Long-travel shock absorbers are fitted as standard.

The off-road section at Bagshot did not present any serious problems to the Ford. The weather had been dry for a week or so before our test so the circuit was not as muddy as on some previous occasions, but we still managed to find enough water holes to get the yellow paintwork thoroughly spattered by the end of the day. Over the rougher dry secti at around 20mph it was fi easy to bottom the front pension and I was grateful the suspension seat, e though occasionally I bour out of it. Keeping the eni revving above 1900 proved to be the best sp range for fast trip times.

Cummins used to suf Ford with a de-rated V 504 ter hosepower and torque puts because Ford was itious about coupling the lparatively high-torque en?, to its eight-speed gearbox, now the box has proved If in service and the engine is ailed with its standard maxim torque of 494Nm 5Ibft) at 1900rpm.

encountered two problems the 8-570-S gearbox. It is a e-change gearbox and the lever has a toggle switch rporated in the knob on the

side of it. The convenil ''H" shift pattern is used I found that first and fifth difficult to engage because aver had to be moved so far ard and to the nearside. I st had to get out of the seat lect these two ratios.

le second problem was in iging from high to low e, which sometimes ied to be a slower procedhan normal. Several times e road section the gearbox )Iained when I tried to go sixth to fourth.

every other respect the Tichormesh gearbox was , allowing fast changes to

be made without double declutching. Range changing could be made even easier, in my opinion, by turning the gear lever knob through 450, so that the toggle switch is facing forwards and consequently less awkward to operate.

Power-assisted steering is standard equipment on D 2014 D 2418 tandems and is of the ram type — that is, it is not integral. It had a very imprecise feel, I found, on the 2418, and in the straight-ahead position required constant correction. On bends there was a tendency to understeer.

The latest D-Series steeringwheel now has two spokes instead of three giving a better unobstructed view of the instrument panel. The wheel has also been strengthened so that it may safely be used by the driver to pull himself into the seat. In fact, there is now no alternative because the grab handle that used to be on the door frame has been removed, in the interest of weight saving, I am told.

I wonder if hgv driving examiners and instructors are aware of the change, since I remember some years ago being severely ticked off by my instructor for using the wheel to get into the cab of an older DSeries.

The problem was that if the wheel was repeatedly used by drivers to swing into the cab, it was weakened and had a tendency to crack after a while. The steering column top bush used to suffer.

Ford's familiar colu mounted switches have vived the test of time. It is cult to think of any wa, improving the light switch /I stalk on the offside of the umn. It is close enough to wheel to allow the drive operate the horn and /or I with the minimum moveme the hand away from the w — a good safety feature.

Only small movements o wheel were needed to cance indicators, and I found thi: noying on roundabouts w the stalk (on the left of the umn) required repeated a tion to keep the flashers wor for as long as was require was doubly difficult in situa • that required gearchangin well as indication becai, found my left arm was woi overtime.

Why doesn't Ford (and r other commercial vel manufacturers for that m fit non-self-cancelling indic with a clearly audible vvarni The spring parking braki the 241 8 operated on leading rear axle and the axle, and the stubby co lever between the seats good control over them. A feature, likely to appe; maintenance personnel, i way the brake chambers o trailing rear axles are locate of harm's way above and I 3r of the axle. The mounting ackets are offset to allow for e large diff bowl and give arance for the air pipes to the ambers.

For a tipper the rear lights are it so good, looking very ex ised and susceptible to image, particularly conbring that this type of lamp 35 prone to letting in water )en fitted to earlier D-Series, rd claims to have cured the )blem now, but it would still prudent. I think, to fit some id of rear light guard on tipper assis.

To keep production costs wn the halogen headlamps the same type as those fitted Escort cars. A bum per wnted headlamp washer is an :ion. The windscreen washer lir)l button on D-Series is )r mounted and I found this rticularly useful over the ight section at Bagshot where facility to clear the screen keep both hands on the eel was much appreciated.

ved to be less than awe in.ing. From 20mph the best

ik deceleration we could ieve was 57 per cent g. For almost new vehicle this is er than may reasonably be ected since the minimum iency required of a vehicle ervice at its annual test is 50 cent g.

itest six-wheeled tipper ssis on the market (Leyland's ier Mastiff and Reiver are ter) and, particularly in its c form, very competitively ed. Our test vehicle's paywas reduced by the heavy y and tipping gear, but this specified particularly for

ry-duty work, and with more al body/gear weight of 1½ it is possible to achieve a oad of around 1 6.5 tonnes 3 tons) on the Ford tipper. iiith the fully rated Cummins engine the D-Series journey s were very good — faster, risingly, than more powerippers CM has tested. (he consumption suffered, but ma bly if the throttle pedal treated more gently better umption figures could be cted.

'aking and steering on the was not as good as on of its competitors, but the • ries range is nearing the )f its life now, and I am sure an expect many improves with the new range that is 3 to replace it.