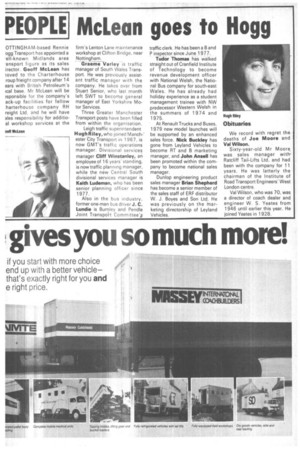 Also in the bus industry, former one-man bus driver J. C. Lundie is Burnley and Pendle Joint Transport Committee', traffic clerk. He has been a B and P inspector since June 1977.

Tudor Thomas has walked straight out of Cranfield Institute of Technology to become revenue development officer with National Welsh, the National Bus company for south-east Wales. He has already had holiday experience as a student management trainee with NW predecessor Western Welsh in the summers of 1974 and 1975.

At Renault Trucks and Buses, 1979 new Model launches will be supported by an enhanced sales force. Nick Buckley has gone from Leyland Vehicles to become AT and B marketing manager, and John Ansell has been promoted within the company to become national sales manager.

Dunlop engineering product sales manager Brian Shepherd has become a senior member of the sales staff of ERF distributor W. J. Boyes and Son Ltd. He was previously. on the Marketing directorship of Leyland Vehicles.