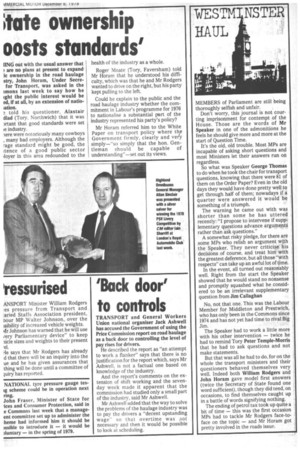 IING out with the usual answer that are no plans at present to expand. ic ownership in the road haulage stry, John Horam, Under Secre for Transport, was asked in the mons last week to say how he ight the public interest would be ed, if at all, by an extension of natioiation.

a. told his questioner, Alastair dlad (Tory, Northwich) that it was otant that good standards were set le industry.

lere were notoriously many cowboys , many bad employers. Although the rage standard might be good, the ;tence of a good public sector ■ loyer in this area redounded to the health of the industry as a whole.

Roger Moate (Tory, Faversham) told Mr Horam that he understood his difficulty, which was that he and Mr Rodgers wanted to drive on the right, but his party kept pulling to the left.

Could he explain to the public and the road haulage industry whether the commitment in Labour's programme for 1976 to nationalise a substantial pert of the industry represented his party's policy?

Mr Horam referred him to the White Paper on transport policy where the Government firmly, clearly and very simply—"so simply that the hon. Gentleman should be capable of understanding" —set out its views.