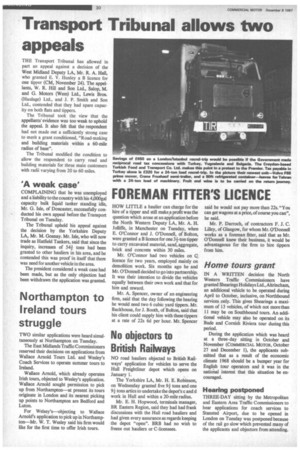 THE Transport Tribunal has allowed in part an appeal against a decision of the West Midland Deputy LA, Mr. R. A. Hall., who granted E. V. Huxley a B licence for one tipper (CM, November 24). The appellants, W. R. Hill and Son Ltd., Salop, M. and G. Motors (Wem) Ltd., Lewis Bros. (Haulage) Ltd., and J. P. Smith and Son Ltd., contended that they had spare capacity on both flats and tippers.

The Tribunal took the view that the appellants' evidence was too weak to uphold the appeal. It also felt that the respondent had not made out a sufficiently strong case to merit a grant conditioned, "Road-making and building materials within a 60-mile radius of base".

The Tribunal modified the condition to allow the respondent to carry road and building materials for three main customers with radii varying from 20 to 60 miles.

COMPLAINING that he was unemployed and a liability to the country with his 4,000gal capacity bulk liquid tanker standing idle, Mr. G. Isle, of Doncaster, successfully conducted his own appeal before the Transport Tribunal on Tuesday.

The Tribunal upheld his appeal against the decision by the Yorkshire Deputy LA, Mr. M. Gosnay. Mr. Isle, who will now trade as Hatfield Tankers, said that since the inquiry, increases of 544 tons had been granted to other hauliers in his area, and he contended this was proof in itself that there was need for another vehicle in the area.

The president considered a weak case had been made, but as the only objection had been withdrawn the application was granted.