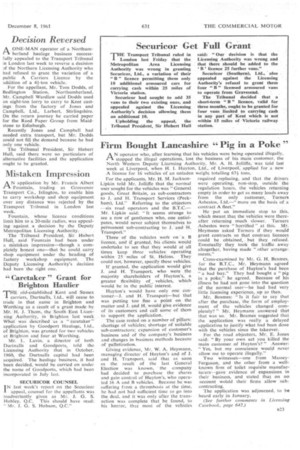 Page 57, 8th December 1961 — Decision Reversed
Close
Noticed an error?
If you've noticed an error in this article please click here to report it so we can fix it.
Keywords : Larbert, Dodds, Haulage

berland haulage business successfully appealed to the Transport Tribunal in London last week to reverse a decision af the Northern Licensing Authority who had refused to grant the variation of a public A Carriers Licence by the addition of a 44-ton vehicle.

For the appellant, Mr. Tom Dodds, of Bedlington Station, Northumberland, Mr. Campbell Wardlaw said Dodds used an eight-ton lorry to carry to Kent castings from the factory of Jones and Campbell, Ltd., Larbert, Stirlingshire. On the return journey he carried paper for the Reed Paper Group from Maidstone to Edinburgh.

Recently Jones and Campbell had needed extra transport, but Mr. Dodds could not fill the demand because he had only one vehicle.

The Tribunal President, Sir Hubert Hull, said there were no particulars of alternative facilities and the application ought to be granted.