What is the Future for Synthetic Rubber ? 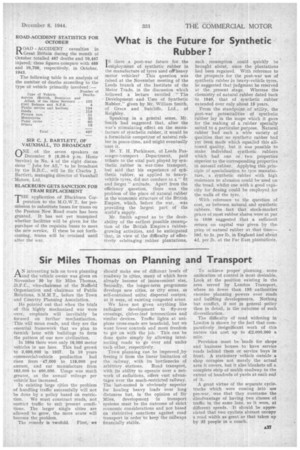 IS there a post-war future for the 'employment of synthetic rubber in the manufacture of tyres used aiheavy motor vehicles? This question was raised at the November meeting of the Leeds branch of the Institute of the Motor Trade, in the discussion which followed a lecture entitled "The Development and Uses of Synthetic Rubber," given by Mr. William Smith, of Grace and Sutcliffe, Ltd., of Keighley.

Speaking in a general sense, Mr. Smith had suggested that, after the war's stimulating effect on the manufacture of synthetic rubber, it would be a formidable competitor of natural rubber in peace-time, and might eventually oust it.

Mr. T. H. Parkinson, of Leeds Passenger-transport Department, paid tribute to the vital part played by synthetic rubber in war-time transport, but said that his experience of synthetic rubber, as applied to heavyvehicle tyres, did not conduce to a " fit and forget" attitude. Apart from the efficiency question, there was the problem of the place of natural rubber in the economic structure of the British Empire, which, before the war, was providing the largest part of the world's supply.

Mr. Smith agreed as to the desirability of the earliest possible resumption of the British Empire s rubbergrowing activities, and he anticipated that, in view of the difficulty of effectively sabotaging rubber plantations,

such resumption could quickly be brought about, once the plantations had been regained. With reference to the prospects for the post-war use of synthetic rubber in heavy-vehicle tyres, he suggested that judgment be reserved at the present stage. Whereas the chemistry of natural rubber dated back to 1840, that of synthetic rubber extended over only about 15 years.

From the standpoint of utility, the post-war potentialities of synthetic rubber lay in the scope which it gave for the making of a rubber specially suited to a particular purpose. Natural rubber had such a wide variety of qualities that no synthetic rubber had yet been made which equalled this allround quality, but it was possible to make individual synthetic rubbers which had one or two properties superior to the corresponding properties in natural rubber. Applying this principle of specialization to tyre manufacture, a synthetic rubber with high resistance to abrasion could be• used on the tread, whilst one with a good capacity for flexing could be employed for the walls of the tyre.

With reference to the question of cost, as between natural and synthetic rubbers, the . fact that stock-market prises of most rubber shares were at par in 1939 suggested that a sufficient return on capital was given by the. price of natural rubber at that time10d, to Is. per lb. in England and about 4d. per lb. at the Far East plantations.