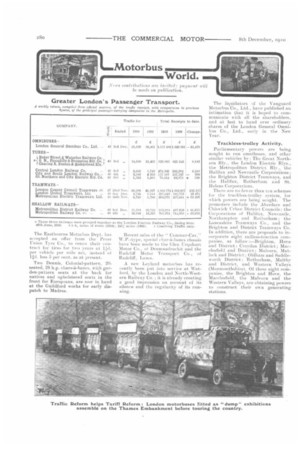 Page 8, 8th December 1910 — Motorbus World.
Close
Noticed an error?
If you've noticed an error in this article please click here to report it so we can fix it.

The Eastbourne Motorbus Dept. has accepted an offer from the Peter Union Tyre Co., to renew their contract for tires for two years at 1-,;d. per vehicle per mile net, instead of lid. less 5 per rent, as at present.

Two Dennis, Colonial-pattern, 20seated, 28 h.p. chers-a-bancs, with garden-pattern seats at the back for natives and upholstered seats in the front for Europeans, are now in hand at the Guildford works for early dispatch to Madras, Recent sales of the " Commer-Car," W.P.-type, special char-a-bones chassis hare been made to the Glen Urquhart Motor Co., tit Drumnadrochit and the Radcliff Motor Transport Co., of Radcliff, Lanes.

A new Leyland motorbus has recently been put into service at Watford, by the London and North-Western Railway Co.; it is already creating a good impression on account of its silence and the regularity of its running.

The liquidators of the Vanguard Motorbus Co., Ltd., have published an intimation that it is hoped to communicate with all the shareholders, and at last to hand over ordinary shares of the London General Omnibus Co., Ltd., early in the New Year.

Trackless-trolley Activity, Parliamentarypowers are being sought to run omnibuses, and other similar vehicles by : The Great Northern Rly., the London Electric Rlys.,. the Metropolitan District Rly., the Halifax and Newcastle Corporations ;. the Brighton District 'rramways, and the Halifax, Rotherham and St. Helens Corporations.

There are no fewer than ten schemes: for the trackless-trolley system, for which powers are being sought. The promoters include the Aberdare and Chiswick Urban District Councils; the Corporations of Halifax, Newcastle, Northampton and Rotherham ; the Lancashire Tramways Co., and the Brighton and District Tramways Co. In addition, there are proposals to incorporate eight railless-traction companies, as follow :-Brighton, Hove and District: Croydon District; Macclesfield and District ; Malvern, Matlock and District; Oldham and Saddleworth District ; Rotherham, Maltby and District, and Western Valleys (Monmouthshire). Of these eight companies, the Brighton and Hove, the Macclesfield, the Malvern and the Western Valleys, are obtaining powers to construct their own generating stations.