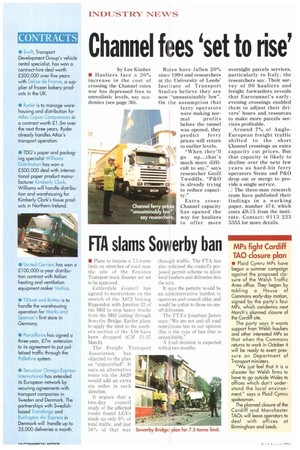 Page 12, 8th August 1996 — MPs fight Cardiff TAO closure plan
Close
Noticed an error?
If you've noticed an error in this article please click here to report it so we can fix it.

• Plaid Cymru MPs have begun a summer campaign against the proposed closure of the Welsh Traffic Area office. They began by tabling a House of Commons early-day motion, signed by the party's four MN, which condemns next March's planned closure of the Cardiff site.

The party says it wants support from Welsh hauliers and other interested MPs so that when the Commons returns to work in October it will be ready to exert pressure on Deportment of Transport ministers. "We just feel that it is a disaster for Welsh firms to have to go outside Wales to offices which don't understand the local environment," says a Plaid Cymru spokesman. The planned closure of the Cardiff and Manchester TAOs will leave operators to deal with offices at Birmingham and Leeds.