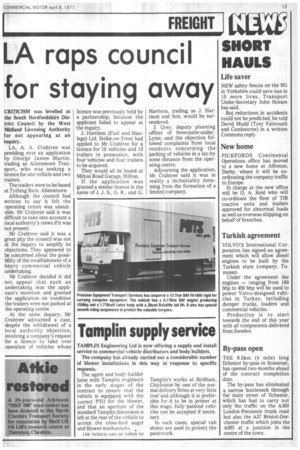 Page 15, 8th April 1977 — SHORT HAULS
Close
Noticed an error?
If you've noticed an error in this article please click here to report it so we can fix it.
Keywords : Counties Of England, Geography Of England, Transport In Somerset, Roads In England, Subdivisions Of England, A303 Road, Cambourne, Volvo

NEW safety fences on the MI in Yorkshire could save one in 10 more lives, Transport Under-Secretary John Horam has said.

But reductions in accidents could not be predicted, he told David Mudd (Tory Falmouth and Cambourne) in a written Commons reply.

PICKFORDS Continental Operations office has moved to a new home at Alfreton, Derby, where it will be coordinating the company traffic to Europe.

In charge at the new office will be D. A. Reid who will co-ordinate the fleet of TIR tractive units and trailers approved for abnormal loads as well as overseas shipping on behalf of branches.

VOLVO'S International Corporation has signed an agreement which will allow diesel engines to be built by the Turkish state company, Tumosan.

Under the agreement the engines — ranging from 180 bhp to 450 bhp will be used to power Volvo-designed vehicles in Turkey, including dumper trucks, loaders and commercial vehicles.

Production is to start towards the end of this year with all components delivered from Sweden.

THE 6.5km (4 mile) long Ilchester by-pass in Somerset, has opened two months ahead of the contract completion date.

The by-pass has eliminated a narrow bottleneck through the main street of Ilchester, which has had to carry not only the traffic on the A303 London-Penzance trunk road but also the A37 Bristol-Dorchester traffic which joins the A303 at a junction in the centre of the town.