New York in a Jam 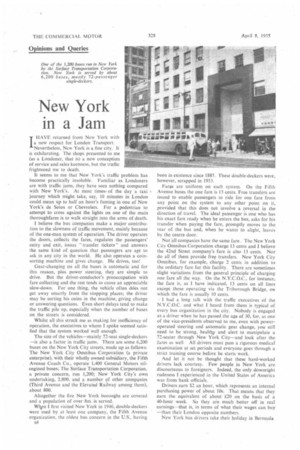 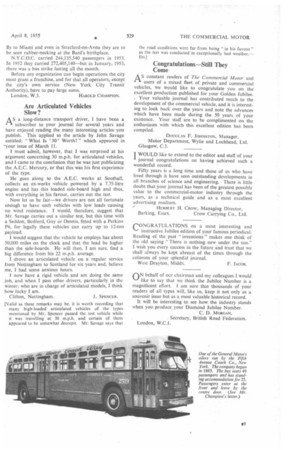 Page 42, 8th April 1955 — New York in a Jam
Close
Noticed an error?
If you've noticed an error in this article please click here to report it so we can fix it.
Keywords : Bus Transport, Bus, Taxicabs Of The United States, Stagecoach In Preston

IHAVE returned from New York with a new respect for London Transport. Nevertheless, New York is a fine city. It is exhilarating. The shops presented to me (as a Londoner, that is) a new conception of service and sales keenness, but the traffic frightened me to death.

It seems to me that New York's traffic problem has become practically insoluble. Familiar as Londoners are with traffic jams, they have seen nothing compared with New York's. At most timesof the day a taxi journey which might take, say, 10 minutes in London could mean up to half an hour's fuming in one of New York's de Sotos or Chevrolets. For a pedestrian to attempt to cross against the lights on one of the main thoroughfares is to walk straight into the arms of death.

I believe the bus companies make a major contribution to the slowness of traffic movement, mainly because of the one-man system of operation. The driver operates the doors, collects the fares, regulates the passengers' entry and exit, issues " transfer tickets" and answers the same kind of question that passengers are apt to ask in any city in the world. He also operates a coin • sorting machine and gives change. He drives, too!

Gear-changing on all the buses is automatic and for this reason, plus power steering, they are simple to drive. But the driver-conductor's preoccupation with fare collecting and the rest tends to cause an appreciable slow-down. For one thing, the vehicle often does not get away smartly from the stopping places; the driver may be sorting his coins in the machine, giving change or answering questions. Even short delays tend to make the traffic pile up, especially when the number of buses on the streets is considered.

Whilst all this struck me as making for inefficiency of operation, the executives to whom I spoke seemed satisfied that the system worked well enough.

The size of the vehicles—mainly 72-seat single-deckers —is also a factor in traffic jams. There are some 6,200 buses on the New York City streets, made up as follows: The New York City Omnibus Corporation (a private enterprise), with their wholly owned subsidiary, the Fifth Avenue Coach Co., operate 1,400 General Motors oilengined buses; The Surface Transportation Corporation, a private concern, run 1,200; New York City's own undertaking, 2,800, and a number of other companies (Third Avenue and the Elevated Railway among them), about 800.

Altogether the five New York boroughs are covered and a population of over 8m. is served.

Wken I first visited New York in 1946, double-deckers were used by at least one company, the Fifth Avenue organization, the oldest bus concern in the U.S., having been in existence since 1885. These double-deckers were, however, scrapped in 1953.

Fares are uniform on each system. On the Fifth Avenue buses the one fare is 15 cents. Free transfers are issued to enable passengers to ride for one fare from any point on the system to any other point on it, provided that this does not involve a reversal in the direction of travel. The ideal passenger is one who has his exact fare ready when he enters the bus, asks for his transfer when paying the fare, promptly moves to the rear of the bus and, when he wants to alight, leaves by the centre door.

Not all companies have the same fare. The New York City Omnibus Corporation charge 13 cents and I believe the 42nd Street company's fare is also 13 cents. Nor do all ot them provide free transfers. New York City Omnibus, for example, charge 2 cents in addition to the ordirlary fare for this facility. There are sometimes slight variations from the general principle of charging one fare all the way. On the N.Y.C.O.C., for instance, the fare is, as I have indicated. 13 cents on all lines except those operating via the TriborouQh Bridge, on which the fare is usually 10 cents.

I had a long talk with the traffic executives of the N.Y.C.O.C. and what I heard from them is typical of every bus organization in the city. Nobody is engaged as a driver when he has passed the age of 30, for, as one of the vice-presidents observed to me, even with poweroperated steering and automatic gear change, you still need to be strong. healthy and alert to manipulate a 72-seater through New York City—and look after the fares as well. All drivers must pass a rigorous medical examination at set periods and everyone goes through a strict training course before he starts work.

And let it not be thought that these hard-worked drivers lack courtesy. Few people in New York are discourteous to foreigners. Indeed, the only downright rudeness I experienced in the United States of America was from bank officials.

Drivers earn $2 an hour, which represents an internal purchasing power of about 10s. That means that they earn the equivalent of about £20 on the basis of a 40-hour week. So they are much better off in real earnings—that is, in terms of what their wages can buy —than their London opposite numbers.

New York bus drivers take their holiday in Bermuda fly to Miami and even in Stratford-on-Avon they are to be seen rubber-necking at the Bard's birthplace.

Before any organization can begin operations the city must grant a franchise, and for that all operators, except the city's own service (New York -City Transit Authority), have to pay large sums.

As a long-distance transport driver, 1 have been a subscriber to your journal for several years and have enjoyed reading the many interesting articles you publish. This applied to the article by John Savage entitled: "What Is '30' Worth?" which appeared in -your issue of March 11.

lf must admit, however, that I was surprised at his argument concerning 30 m.p.h. for articulated vehicles, and I came to the conclusion that he was just publicizing the A.E.C. Mercury, or that this was his first experience of the type.

He goes along to the A.E.C. works at Southall, collects an ex-works. vehicle powered by a 7.75-litre engine and has this loaded side-board high and thus, with everything in his favour, carries out the test.

Now let us be fair—we drivers are not all fortunate enough to have such vehicles with low loads causing no wind resistance, I would, therefore, suggest that Mr. Savage carries out a similar test, but this time with a Seddon, Bedford, Guy or Dennis, fitted with a Perkins P6, for legally these vehicles can carry up to 12-ton payload.

I would suggest that the vehicle he employs has about 50,000 miles on the clock and that the load be higher than the side-boards. He will then, I am sure, find a big difference from his 22 m.p.h. average.

I drove an articulated vehicle on a regular service from Nottingham to Scotland for six years and, believe me, I had some anxious hours.

I now have a rigid vehicle and am doing the same job, and when I pass other drivers, particularly in the winter, who are in charge of articulated models, I think how lucky I RM.

[Valid as these remarks may be, it is worth recording that many high-loaded articulated vehicles of the types mentioned by Mr. Spencer passed the test vehicle while it was travelling at 30 m.p.h. and certain of them appeared to be somewhat decrepit. Mr. Savage says that the road conditions were far from being "its his favour" as the test was conducted in exceptionally bad weather.— ED.]

A S constant readers of The Commercial Motor and users of a mixed fleet of private and commercial vehicles, we would like to congratulate you on the excellent production published for your Golden Jubilee, Your valuable journal has contributed much to the

development of the commercial vehicle, and it is interesting to look back over the years and note the advances which have been made during the 50 years of your existence. Your staff are to be complimented on the enthusiasm with which this excellent edition has been compiled.

WOULD like to extend to the editor and staff of your I journal congratulations on having achieved such a wonderful record.

Fifty years is a long time and those of us who have lived through it have seen outstanding developments in all branches of science and engineering. There is little doubt that your journal has been of the greatest possible value to the commercial-motor industry through the years, as a technical guide and as a most excellent advertising medium.

CONGRATULATIONS on a most interesting and instructive Jubilee edition of your famous periodical. Reading of the past "inventions" makes one think of the old saying "There is nothing new under the sun." I wish you every success in the future and trust that we shall always be kept abreast of the times through the columns of your splendid journal.

ON behalf of our chairman and my colleagues I would like to say that we think the Jubilee Number is a magnificent effort. I am sure that thousands of your readers of all types will, like us, keep it not only as a souvenir issue but as a most valuable historical record. It will be interesting to see how the industry stands when you produce, your Diamond Jubilee Number. C. D. MORGAN,