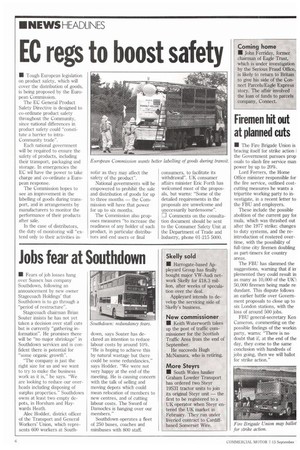 Page 8, 7th September 1989 — Jobs fear at Southdown
Close
Noticed an error?
If you've noticed an error in this article please click here to report it so we can fix it.
Keywords : Southdown, Labor

• Fears of job losses hang over Sussex bus company Southdown, following an announcement by new owner Stagecoach Holdings' that Southdown is to go through a "period of restructure".

Stagecoach chairman Brian Sauter insists he has not yet taken a decision over staff cuts but is currently "gathering infomiation". He promises there will be no major shrinkage" in Southdown services and is confident there is potential for "some organic growth".

"The company is just the right size for us and we want to try to make the business work as it is," he says. "We are looking to reduce our overheads including disposing of surplus properties." Southdown owns at least two empty depots, in Horsham and Haywards Heath.

Alec Hodder, district officer of the Transport and General Workers' Union, which represents 600 workers at South down, says Souter has declared an intention to reduce labour costs by around 10%. "He is hoping to achieve this by natural wastage but there could be some redundancies," says Hodder. "We were not very happy at the end of the meeting. He is causing concern with the talk of selling and moving depots which could mean relocation of members to new centres, and of cutting labour costs. The Sword of Damocles is hanging over our members."

Southdown operates a fleet of 250 buses, coaches and minibuses with N0 staff.