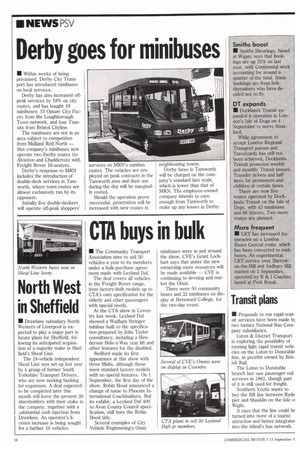 Page 18, 7th September 1989 — Derby goes for minibuses
Close
Noticed an error?
If you've noticed an error in this article please click here to report it so we can fix it.

• Within weeks of being privatised, Derby City Transport has introduced minibuses on local services.

Derby has also increased offpeak services by 18% on city routes, and has bought 19 minibuses: 15 Optare City Pacers from the Loughborough Town network, and four Transits from Bristol Cityline.

The minibuses are not in an area subject to competition from Midland Red North — that company's minibuses now operate two Derby routes (to Alvaston and Chadderton) with Freight Rover 16-seaters.

Derby's response to MRN includes the introduction of double-deck services in Tamworth, where town routes are almost exclusively run by its opponent.

Initially five double-deckers will operate off-peak shoppers' services on MRN's minibus routes. The vehicles are employed on peak contracts in the Tamworth area and their use during the day will be marginally costed.

Should the operation prove successful, penetration will be increased with new routes in neighbouring towns.

Derby fares in Tamworth will he charged on the company's standard fare scale, which is lower than that of MRN. The employee-owned company intends to earn enough from Tamworth to make up any losses in Derby.