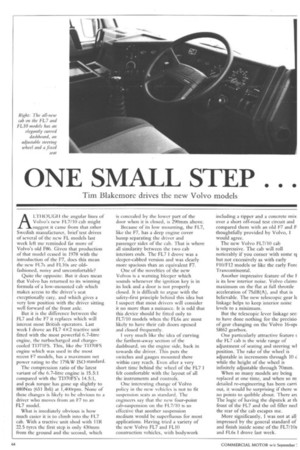 ALTHOLIGI I the angular lines of Volvo's new FL7/10 cab might suggest it came from that other Swedish manufacturer, brief test drives of several of the new FL models last week left me reminded far more of Volvo's old F86. Given that production of that model ceased in 1978 with the introduction of the F7, does this mean the new FL7s and FLIOs are oldfashioned, noisy and uncomfortable?

Quite the opposite. But it does mean that Volvo has returned to its winning formula of a low-mounted cab which makes access to the driver's scat exceptionally easy, and which gives a very low position with the driver sitting well forward of the front axle.

But it is the difference between the FL7 and the F7 it replaces which will interest most British operators, Last week I drove an FL7 4><2 tractive unit fitted with the most powerful 6.7-litre engine, the turbocharged and chargecooled T1)71FS. This, like the TD70FS engine which was used in the most recent F7 models, has a maximum net power rating to the 179kW ISO standard.

What is imediately obvious is how much easier it is to climb into the FL7 cab. With a tractive unit shod with I1R 22.5 tyres the first step is only 430mm from the ground and the second, which

is concealed by the lower part of the door when it is closed, is 290mm above.

Because of its low mounting, the FL7, like the F7, has a deep engine cover hump separating the driver and passenger sides of the cab. That is where all similarity between the two cab interiors ends. The FL7 I drove was a sleeper-cabbed version and was clearly more spacious than an equivalent F7.

One of the novelties of the new Volvos is a warning bleeper which sounds whenever the ignition key is in its lock and a door is not properly closed. It is difficult to argue with the safety-first principle behind this idea but I suspect that most drivers will consider it no more than a nuisance. It is odd that this device should be fitted only to FL7/10 models when the FL6s are most likely to have their cab doors opened and closed frequently.

1 very much like the idea of curving the furthest-away section of the dashboard, on the engine side, back in towards the driver. This puts the switches and gauges mounted there within easy reach. Even after a very short time behind the wheel of the FL7 I felt comfortable with the layout of all the instruments and controls.

One interesting change of Volvo policy in the new vehicles is not to fit suspension seats as standard. The engineers say that the new four-point cab-suspension on the FL7/10 is so effective that another suspension medium would be superfluous for most applications. Having tried a variety of the new Volvo FL7 and FL10 construction vehicles, with bodywork including a tipper and a concrete mix. over a short off-road test circuit and compared them with an old F7 and F thoughtfully provided by Volvo, I would agree.

The new Volvo FL7/10 cab is impressive. The cab will roll noticeably if you corner with some s/ but not excessively as with early F10/F12 models or like the early Forc Trancontinental.

Another impressive feature of the E is its low interior noise. Volvo claims maximum on the flat at full throttle acceleration of 75dB(A), and that is believable. The new telescopic gear lc linkage helps to keep interior noise levels to a minimum.

But the telescopic lever linkage see: to have done nothing for the precisio of gear changing on the Volvo 16-spt SR62 gearbox.

One particularly attractive feature c the FL7 cab is the wide range of adjustment of seating and steering wl position. The rake of the wheel is adjustable in increments through 10 while the height of the wheel is infinitely adjustable through 70mm.

When so many models are being replaced at one time, and when so m detailed re-engineering has been card out, it would be surprising if there w no points to quibble about. There arc The logic of having the dipstick at th front of the FL7 and the oil filler necl the rear of the cab escapes me.

More significantly, I was not at all impressed by the general standard of and finish inside some of the FL7/10s and FL6s I drove last week.