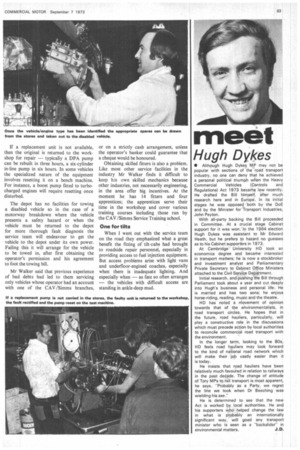 • Although Hugh Dykes MP may not be popular with sections of the road transport industry, no one can deny that he achieved a personal political triumph when the Heavy

Commercial Vehicles (Controls and Regulations) Act 1973 became law recently. He drafted the Bill himself, after much research here and in Europe. In its initial stages he was opposed both by the DoE and by the Minister for Transport Industries, John Peyton.

With all-party backing the Bill proceeded in Committee. At a crucial stage Cabinet support for it was won. In the 1964 election Hugh Dykes was assistant to Mr Edward Heath, but he prefers to hazard no guesses as to his Cabinet supporters in 1973.

At Cambridge University HD took an economics degree and became interested in transport matters: he is now a stockbroker and investment analyst and Parliamentary Private Secretary to Cabinet Office Ministers attached to the Civil Service Department.

Initial research, and pushing the Bill through Parliament took about a year and cut deeply into Hugh's business and personal life.. He is married and has two sons; he enjoys horse-riding, reading, music and the theatre.

HD has noted a Movement of opinion towards that of the environmentalists, in road transport circles. He hopes that in the future, road hauliers, particularly, will play a constructive role in the discussions which must precede action by local authorities to reconcile commercial road transport with the environment.

In the longer term, looking to the 80s, HD feels road hauliers may look forward to the kind of national road network which will make their job vastly easier than it is today.

He insists that road hauliers have been relatively much favoured in relation to railways in the past decade. The change of attitude of Tory MPs tq rail transport is most apparent, he says. "Probably as a Party, we regret the line we took when Dr Beech ing was wielding his axe."

He is determined to see that the new Act is worked by local authorities. He and his supporters who helped change the law in what is probably an internationally significant way, will goad any transport minister who is seen as a "backslider' in