Owner-driver leaves Tarmac with a truck 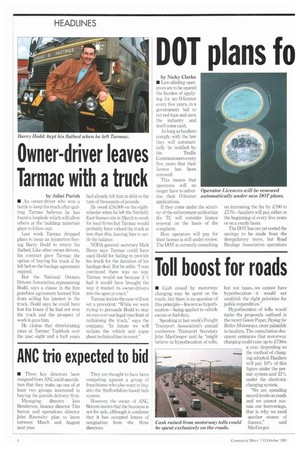 Page 6, 7th October 1993 — Owner-driver leaves Tarmac with a truck
Close
Noticed an error?
If you've noticed an error in this article please click here to report it so we can fix it.
Keywords : Truck, Vehicles, Tarmac Limited, Technology, Business

by Juliet Parish • An owner-driver who won a battle to keep his truck after quitting Tarmac believes he has found a loophole which will allow others at the building materials giant to follow suit.

Last week Tarmac dropped plans to issue an injunction forcing Barry Hodd to return his flatbed. Like other owner-drivers, his contract gave Tarmac the option of buying his truck if he left before the haulage agreement expired.

But the National Owners Drivers Association, representing Hodd, says a clause in the hire purchase agreement banned him from selling his interest in the truck. Hodd says he could have lost his house if he had not won the truck and the prospect of work it gave him.

He claims that deteriorating rates at Tarmac Topblock over the past eight and a half years had already left him in debt to the tune of thousands of pounds He owed £34,000 on his eightwheeler when he left the Ninfield, East Sussex site in March to work for local firms but Tarmac would probably have valued the truck at less than this, leaving him to settle the balance.

NODA generalsecretary Mick Binns says Tarmac could have sued Hodd for failing to provide his truck for the duration of his haulage deal. But he adds: "I was convinced there was no way Tarmac would sue because if it had it would have brought the way it treated its owner-drivers into the open at court," Tarmac insists the case will not set a precedent: "While we were trying to persuade Hodd to stay we ran over our legal time limit of reclaiming the truck," says the company. In future we will reclaim the vehicle and argue about technicalities in court."