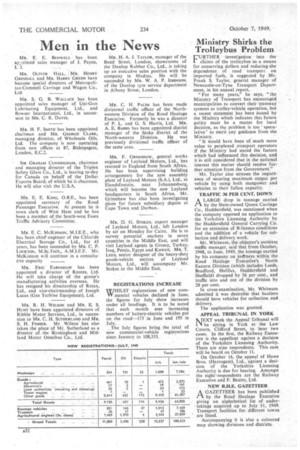 SIR GRAHAM CUNNINGHAM, chairman and managing director of the Triplex Safety Glass Co., Ltd., is leaving to-day for Canada on behalf of the Dollar Exports Board, of which he is chairman. He will also visit the U.S.A.

MR. E. E. Ktma, 0.B.E., has been appointed secretary of the Road Passenger Executive. At present he is town clerk of West Ham and he has been a member of the South-west Essex Traffic Advisory Committee.

LOCKTON, A.M.I.E.E. Mr. McKinnon will continue in a consultative capacity MR. . ERfC EARNSHAW has been appointed a director of Rootes, Ltd. He will take charge of the • group's manufacturing activities overseas. He has resigned his directorship of Rotax, Ltd., and vice-chairmanship of Joseph Lucas (Gas Turbine Equipment), Ltd.

MR. R. H. WILSON and MR. E. S. Huarr have been appointed directors of Ribble Motor Services, Ltd., in succession to MR. C. H. SUTHERLAND and MR. S. H. FISHER. Mr Wilsonhas also taken the place of Mr. Sutherland as a director of the Birmingham and Midland Motor Omnibus Co., Ltd. MR. H, A. J. TAYLOR, manager of the Bond Street, London, showrooms of the Dunlop Rubber Co., Ltd., is taking up an executive sales position with the company in Madras. He will be succeeded by MR. W. A. P. JOHNSON, of the Dunlop tyre service department in Albany Street, London.

M. F. Gaimsttaw, general works engineer of Leyland Motors, Ltd., has reurned to England from South Africa, He has been supervising building arrangements for the new assembly plant of Leyland Motors (S.A.), Ltd., at Elandsfontein, near Johannesburg, which will become the new Leyland headquarters in South Africa. Mr. Grimshaw has also been investigating plans for future subsidiary depots at Cape Town and Durban.,

MR. D. G. SfoicEs, export manager of Leyland Motors, Ltd., left London by air on Monday for Cairo. He is to survey potential markets in seven countries in the Middle East, and will visit Leyland agents in Greece, Turkey, Iraq, Persia, Egypt and Kuwait. MR. T. LEES, senior designer of the heavy-duty goods-vehicle section of Leyland Motors, Ltd.' will accompany Mr. Stokes to the Middle East.