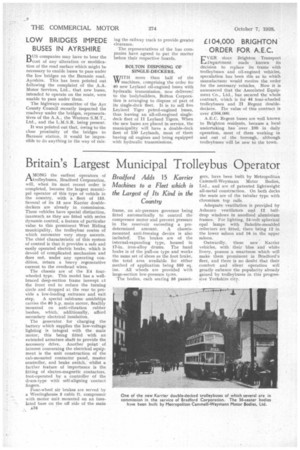 Page 52, 7th October 1938 — LOW BRIDGES IMPEDE BUSES IN AYRSHIRE
Close
Noticed an error?
If you've noticed an error in this article please click here to report it so we can fix it.

DUS companies may have to bear the //cost of any alteration or modification of the road surface which might be necessary to enable buses to pass under the low bridges on the Barassie road, Ayrshire. This has been pointed out following the complaint of the A.A. Motor Services, Ltd., that new buses, intended to operate on the route, were unable to pass under them.

The highways committee of the Ayr County Council recently inspected the roadway under the bridges, representatives of the A.A., the Western S.M.T., Ltd., and the L.M.S.R. being present.

It was pointed out that, owing to the close proximity of the bridges to Barassie station, it would be impossible to do anything in the way of rais lug the railway track to provide greater clearance.

The representatives of the bus companies have agreed to put the matter before their respective hoards.

WITH more than half of the WV machines, comprising the order for 40 new Leyland oil-engined buses with hydraulic transmission, now delivered to the bodybuilders, Bolton Corporation is arranging to dispose of part of its single-deck fleet. It is to sell five Leyland Tiger petrol-engined buses, thus leaving an all-oil-engined singledeck fleet of II Leyland Tigers. When the new buses are placed in service, the municipality will have a double-deck fleet of 150 Leylands, most of them having oil engines and being equipped with hydraulic transmissions.

EVER since Brighton Transport Department made known its decision to replace its trams with trolleybuses and oil-engined vehicles, speculation has been rife as to which manufacturer would receive the order for the necessary vehicles. Now it is announced that the Associated Equipment Co., Ltd., has secured the whole contract, which is for 44 four-wheeled trolleybuses and 21 Regent doubledeckers. The value of this contract is over £104,000.

A.E.C. Regent buses are well known to Brighton residents, because a local undertaking has 'over 100 in daily operation, most of them working in and . out of the borough, although trolleybuses will be new to the town.