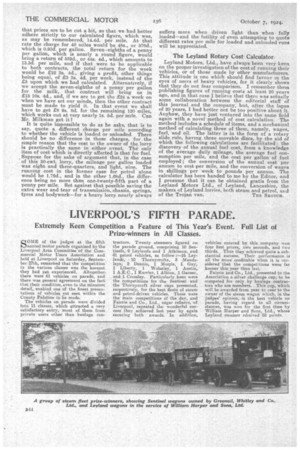 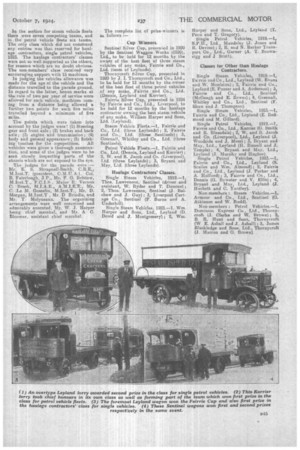 Extremely Keen Competition a Feature of This Year's Event. Full List of Prize-winners in All Classes.

S0111E of the judges at the fifth annual motor parade organized by the Liverpool Area Committee of the Commercial Motor Users Association and held at Liverpool on Saturday, September 27th, remarked that the competition in the various classes was the keenest they had yet experienced. Altogether. there were 61 vehicles on parade, and there was general agreement on the fact that their condition, even to the minutest detail, enabled one of the finest presentations of vehicles yet seen within the County Palatine to be made. The vehicles on parade were divided into 11 classes, which attracted a very satisfactory entry, Most of them from private users other than haulage COD tractors. Twenty steamers figured on the parade ground, comprising 10 Sentinels, 9 Leylands and 1 Atkinson, and 41 petrol vehicles, as follow :-16 Leylands, 4 10 Thornycrofts, 3 Maudslays, 2 Dennis, 1 Morris, 1 Guy, 1 Liberty, 1 Wolseley, 1 Austin, 1 A.E.C., 1 Karrier, 1 Albion, 1 Garner, and 1 Crossley. Particularly keen were the competitions for the Sentinel and the Thornycroft silver cups presented, respectively, for the best fleets of steam and petrol-driven vehicles. These were the main competitions of the day, and Fairrie and Co., Ltd., sugar refiners, of Liverpool, repeated the wonderful success they achieved last year by again securing both awards. In addition, vehicles entered by this company won four first prizes, tWo seconds, and two thirds. Thus they achieved quite a substantial success. Their performance is all the more creditable when it is consideredthat the competitions were far keener this year than last,

Fairrie and Co., Ltd.., presented to the Association a silver challenge cup;4to be competed for only by haulage contractors who are members. This cup, Which will be awarded from year to year to the owner of the steam wagon which, in the judges' opinion, is the best vehicle on parade, having regard to all circumstances, was won for the first time by William Harper and Sons, Ltd., whose Leyland steamer received 88 points.

-In the section for steam vehicle fleets there were seven competing teams, and in the petrol vehicle fleets six teams. The only class which did not command. any entries was that reserved for haulage contractors, single petrol vehicles, 1923. The haulage contractors' classes were pot so well supported as the others, for reasons which are no doubt obvious. The non-members' class received very encouraging support with 15 machines. In judging the vehicles allowance was made for the age of the vehicle and the distance travelled to the parade ground. In regard to the latter, bonus marks at the rate of two per year of service were allowed for each vehicle, machines corning from a distance being allowed a further two points for each live miles travelled beyond a minimum of five miles.

The. points which were taken into account by the judges were (11 Steering gear and front axle ; l2) brakes and back axle; (3) engine and transtnission ; (4) body and general appearance ; (5) finish

ing touches for the competition. All vehicles were given a thorough examination, and some of the judges were to be aeen closely inspecting parts of the chassis which are not exposed to the eye. The judges for the parade were :— Mr. E. S. Shrapnell,Smith, C.B.E., M.Inst.T. (president, C.M.U.A.), B.-Fairclough, J.P., Mr. F. G. Bristow, M.Inst.T., F.C.I.S., Major R. Vernon

Sentinel Silver Cup, piesented in 1920 by the Sentinel Waggon Works 11920), Ltd., to be held for 12 months by the owner of the best fleet of three steam vehicles of any make, Fairrie and Co., Ltd. (team of Lay) ands).

Thornycroft Silver Cup, presented in 1920 by J. I. Thornycroft and Co., Ltd., to be field for 12 months by the owner of the best fleet of three petrol vehicles of any make, Fairrie and Co.,. Ltd. (Dennis, Leyland and Karrier).

Fairrie Silver Cup, presented in 1924 by Fairrie and Co., Ltd., Liverpool, to be held for 12 months by the haulage contractor owning the best steam vehicle of arty make, William Harper and Sons, Ltd. (Leyland).

Classes for Other than Haulage Contractors.