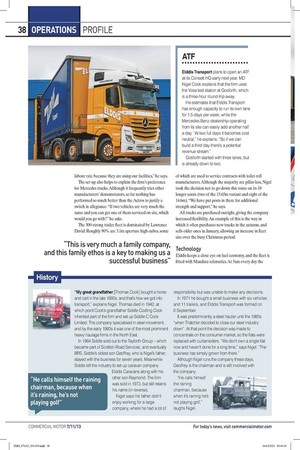 Page 30, 7th November 2013 — is ory
Close
Noticed an error?
If you've noticed an error in this article please click here to report it so we can fix it.

"My great grandfather [Thomas Cook] bought a horse and cart in the late 1880s, and that's how we got into transport," explains Nigel. Thomas died in 1942, at which point Cook's grandfather Siddle Codling Cook inherited part of the firm and set up Siddle C Cook Limited. The company specialised in steel movement, and by the early 1960s it was one of the most prominent heavy haulage firms in the North East. In 1964 Siddle sold out to the Tayforth Group — which became part of Scottish Road Services, and eventually BRS. Siddle's oldest son Geoffrey, who is Nigel's father, stayed with the business for seven years. Meanwhile Siddle left the industry to set up caravan company

Elddis Caravans along with his other son Raymond. The firm was sold in 1973, but still retains his name (in reverse). Nigel says his father didn't enjoy working for a large company, where he had a lot of

responsibility but was unable to make any decisions.

In 1971 he bought a small business with six vehicles and 11 trailers, and Elddis Transport was formed on 6 September.

It was predominantly a steel haulier until the 1980s "when Thatcher decided to close our steel industry down". At that point the decision was made to concentrate on the consumer market, so the flats were replaced with curtainsiders. "We don't own a single flat now and haven't done for a long time," says Nigel. "The business has simply grown from there." Although Nigel runs the company these days, Geoffrey is the chairman and is still involved with

"He calls himself the raining chairman, because when it's raining he's not playing golf," laughs Nigel.