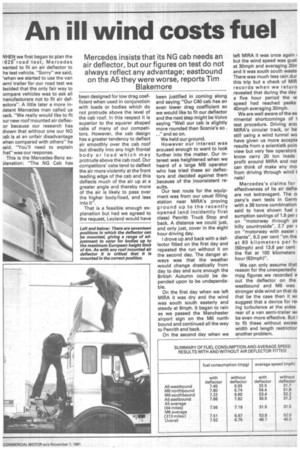 Page 35, 7th November 1981 — An ill wind costs fuel
Close
Noticed an error?
If you've noticed an error in this article please click here to report it so we can fix it.
Keywords : Truck, Semi-trailer Truck, Wind Tunnel, Hospitality / Recreation

Mercedes insists that its NG cab needs an air deflector, but our figures on test do not always reflect any advantage; eastbound on the A5 they were worse, reports Tim Blakemore

!VHEN we first began to plan the

625 road test, Mercedes vented to fit an air deflector to he test vehicle. "Sorry" we said, 'when we started to use the van ;emi trailer for our road test we lecided that the only fair way to ;ompare vehicles was to ask all -nanufacturers not to fit air defectors". A little later a more in;istent Mercedes man called us pack. "We really would like to fit )ur new roof mounted air deflec:or because our research has ;hown that without one our NG ;a1) is at an unfair disadvantage tvhen compared with others" he ;aid. "You'll need to explain :hat" was our response.

This is the Mercedes-Benz explanation: "The NG Cab has been designed for low drag coefficient when used in conjunction with loads or bodies which do not protrude above the level of the cab roof. In this respect it is superior to the squarer shaped cabs of many of our competitors. However, the cab design has a greater tendency to deflect air smoothly over the cab roof but directly into any high frontal body or load which may protrude above the cab roof. Our competitors' cabs tend to deflect the air more violently at the front leading edge of the cab and this deflects much of the air up at a greater angle and thereby more of the air is likely to pass over the higher body/load, and less into it".

That is a feasible enough explanation but had we agreed to the request, Leyland would have been justified in coming along and saying "Our C40 cab has an even lower drag coefficient so we would like to fit our deflector and the next Step might be Volvo saying "Well our cab is slightly more rounded than Scania's so. .." and so on.

We held our ground.

However our interest was aroused enough to want to look further into the matter. Our interest was heightened when we heard of a large MB operator who has tried these air deflectors and decided against them .because of the inconsistent results.

Our test route for the equipment was from our usual filling station near MIRA's proving ground up to the recently opened (and incidently first class) Penrith Truck Stop and back. A distance we could just, and only just, cover in the eight hour driving day.

I drove up and back with a deflector fitted on the first day and repeated the run without it on the second day. The danger always was that the weather would change drastically from day to day and sure enough the British Autumn could be depended upon to be undependable.

On the first day when we left MIRA it was dry and the wind was south south easterly and steady at 8mph. It began to rain as we passed the Manchester airport sign on the M6 north bound and continued all the way to Pen rith and back.

On the second day when we left MIRA it was once again but the wind speed was gust at 30mph and averaging 2Orr and it was south south weste There was much less rain dur this trip but a check of MIR. records when we return revealed that during the day a five hour period the w speed had reached peaks 40mph averaging 30mph.

We are well aware of the ex rimental shortcomings of 1 test procedure. Driving arm. MIRA's circular track, or be still using a wind tunnel wo have given us more accepta results from a scientist§ poin view but very few operators know carry 20 ton loads profit around MIRA and nor can think of make any moi from driving through wind t nels!

Mercedes's claims for effectiveness of its air deflei are not extravagant. The cc pany's own tests in Germ with a 38 tonne combination said to have shown fuel c sumption savings of 1.9 per c on "motorway through pa hilly countryside", 2.7 per c on "motorway with easier ! dients", 6.3 per cent "on the at 80 kilometers per hi (50mph) and 13.6 per cent the flat at 100 kilometers hour (62mph)".

We can only assume that reason for the unexpectedly mpg figures we recorded vl out the deflector on the westbound and M6 was stronger side wind on that de that be the case then it w( suggest that a device for rec ing turbulence at the sides rear of a van semi-trailer wc be even more effective. But I to fit these without exceec width and length restrictior another problem.