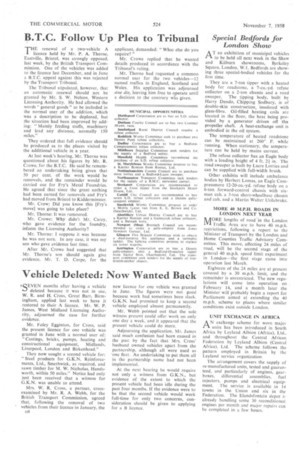 Page 62, 7th November 1958 — B.T.C. Follow Up Plea to Tribunal
Close
Noticed an error?
If you've noticed an error in this article please click here to report it so we can fix it.
Keywords : Thorne, British Transport Commission, Law / Crime

THE renewal of a two-vehicle A licence held by Mr. P. A. Thorne, Eastville, Bristol, was strongly opposed, last week, by the British Transport Commission. One of the vehicles was added to the licence last December, and in June

B.T.C. appeal against this was rejected by the Transport Tribunal.

The Tribunal stipulated, however, that an automatic renewal should not be granted by Mr. S. W. Nelson, Western Licensing Authority. He had allowed the words "general goods" to be included in the normal user of the addition, which was a description to be deplored, but the situation had been improved by adding: "Mainly feeding stuffs, machinery and lead any distance, normally 150 miles."

They ordered that full evidence should be produced as to the places visited by the additional vehicle in a year.

At last week's hearing, Mr. Thorne was questioned about his figures by Mr. R. Crowe. for the B.T.C. He said he remembered an undertaking being given that 50 per cent. of the work would be removals, and the remainder would be carried out for Fry's Metal Foundries. He agreed that since the grant nothing had been earned for removals and Fry's had moved from Bristol to Kidderminster.

Mr. Crow: Did you know this [Fry's move] was going to take place?

Mr. Thorne: It was rumoured.

Mr. Crowe: Why didn't Mr. Carey, who gave evidence for the foundry, inform the Licensing Authority?.

Mr. Thorne: I suppose it was because he was not sure. In any case, it was my son who gave evidence last time.

After Mr. Crowe had suggested that Mr. Thorne's son should again give evidence, Mr. T. D. Corpe, for the applicant, demanded: "What else do you require? "

Mr. Crowe replied that he wanted details produced in accordance with the Tribunal's ruling.

411-. Thorne had requested a common normal user for the two vehicles-12 named traffics in England, Scotland and Wales, His application was adjourned sine die, leaving him free to operate until a decision to the contrary was given.