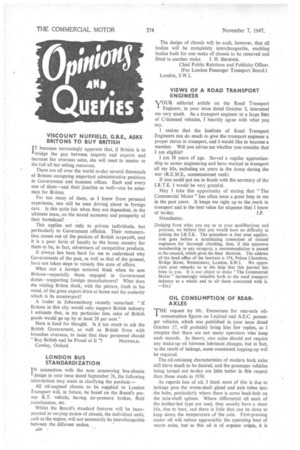 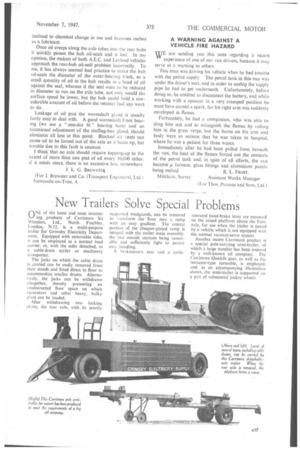 increasingly apparent that, if Britain is to bridge the gap between imports and exports and increase her overseas sales, she will need to muster to the full all her selling resources.

There are all over the world to-day several thousands of Britons occupying important administrative positions in Government and business offices. Each and every one of them—and their families as well—can be salesmen for Britain.

Far too many of them, as I know from personal experience, can still be seen driving about in foreign cars. Is this quite fair when they are dependent, in the ultimate issue, on the sound economy and prosperity of their homeland?

This applies not only to private individuals, but particularly to Government officials. Their remuneration comes out of the pockets of British taxpayers, and it is a poor form of loyalty to the home country for them to be, in fact, advertisers of competitive products.

It always has been hard for me to understand why Governments of the past, as well as that of the present, have not taken steps to remedy this state of affairs.

What can a foreign national think when he sees Britons—especially those engaged in Government duties—supporting foreign manufacturers? What does the visiting Briton think, with the picture, fresh in his mind, of the great export drive at home and the austerity which is its counterpart?

A trader in Johannesburg recently remarked: " If Britons in this city would only support British industry I estimate that, in my particular line, sales of British goods would go up by at least 20 per cent."

Here is food for thought. Is it too much to ask the British Government, as well as British firms with branches overseas, to insist that their personnel should " Buy British and be Proud of It "? NUFFIELD. Cowley, Oxford.

LONDON BUS STANDARDIZATION IN connection with the note concerning ME-chassis design in your issue dated September 26, the following information may assist in clarifying the position:—

All oil-engined chassis to be supplied to London Transport will, in future, be based on the Board's prewar .R.T. vehicle, having air-pressure brakes, fluid transinisSion, etc.

Whilst the Board's standard features will be incorporated in varying makes of chassis, the individual units, ;uch as the engine, will not necessarily be interchangeable between the different makes.

A34 The design of chassis will be such, however, that all bodies will be completely interchangeable, enabling bodies built for one make of chassis to be removed and fitted to another make. J. H. BREBNER.

VIEWS OF A ROAD TRANSPORT ENGINEER TOUR editorial article on the Road Transport Engineer, in your issue dated October 3, interested me very much. As a transport engineer to a large fleet of C-licensed vehicles, I heartily agree with what you say.

I realize that the Institute of Road Transport Engineers can do much to give the transport engineer a proper status in transport, and I would like to become a member. Will you advise me whether you consider that I am eligible?

I am 38 years of age. Served a regular apprenticeship to motor engineering and have worked in transport all my life, including six years in the Army during the war (R.E.M.E., commissioned rank).

If you could put me in touch with the secretary of the I.R.T.E. I would be very grateful.

May I take this opportunity of stating that "The Commercial Motor" has often been a great help to me in the past years. It keeps me right up to the park in transport and is the best value for sixpence that I know of to-day. J.P. Manchester.

[Judging from what you say as to your qualifications and position, we believe that you would have no difficulty in joining the I.R.T.E. The procedure is that your application goes before a scrutinizing committee of trained engineers for thorough checking, then, if this approves membership in any category, a recommendation is passed to the council, which gives the final decision. The address of the head office of the Institute is 174, Palace Chambers, Bridge Street, Westminster, London, S.W.1. We appreciate your remarks as to the help that this journal has been to you. It is our object to make "The Commercial Motor" increasingly valuable both to the road transport industry as a whole and to allthose concerned with it. —Eo.] OIL CONSUMPTION OF REARAXLES THE request by Mr. Ernvnerson for rear-axle oilconsumption figures on Leyland and A.E.C. passenger vehicles, which was published in your issue dated October 17, will probably bring him few replies, as I imagine that there are not many operators who keep such records. In theory, rear axles should not require any make-up oil between lubricant changes, but in fact, as the result of leakage, some occasional topping-up will be required.

The oil-retaining characteristics of modern back axles still leave much to be desired, and the passenger vehicles being turned out to-day are little better in this respect than those made in 1930.

As regards loss of oil, I think most of this is due to leakage pass the worm-shaft gland and axle tubes into the hubs, particularly where there is some back-lash on the axle-shaft splines. Where differential oil seals of the leather-hat type are used, they usually have a short life, due to heat, and there is little that can be done to keep down the temperature of the axle. First-pressing casto7 oil will reduce appreciably the operating heat of worm axles, but as this oil is of organic origin, it is

inclined to chemical change in use and becomes useless as a lubricant.

Once oil creeps along the axle tubes into the rear hubs it quickly passes the hub oil-seals and is lost. In my opinion, the makers of both A.E.C. and Leyland vehicles approach the rear-hub oil-seal problem incorrectly To me, it has always seemed bad practice to make the huh oil-seals the diameter of the outer-bearing track, as a small quantity of oil in the hub results in a head of oil against the seal, whereas if the seal were to be reduced in diameter to run on the axle ,tube, not only would the surface speed be lower, but the hub could hold a considerable amount of oil before the retainer had any work to do.

Leakage of oil past the wormshaft gland is usually fairly easy to deal with, A good wormshaft front bearing (we use a "one-dot fit" bearing here) and an occasional adjustment of the stuffing-box gland, should eliminate all loss at this .point. Blocked air vents can cause oil to be forced out of the axle as it heats up, but trouble due to this fault is unusual.

I think that no axle should require topping-up to the extent of more than one pint of oil every 10,000 miles; if it needs more, there is an excessive loss somewhere

(For J. Brewster and Co. (Transport Eni_rineers), Ltd.) Newcastle-on-Tvne, 4. A WARNING AGAINST A VEHICLE FIRE HAZARD WE are sending you this note regarding a recent " experience of one of our van drivers, because it may serve as a warning to others.

This man was driving his vehicle when he had trouble with the petrol supply The petrol tank-in this van was under the driver's seat, and in order to unship the supply pipe he had to get underneath Unfortunately, before doing so, he omitted to disconnect the battery, and while working with a spanner in a very cramped position he must have caused a spark, for his right arm was suddenly enveloped in flames.

Fortunately, he had a companion, who was.able to drag him out and to extinguish the flames by rolling him in the grass verge, but the burns on his arm and body were so serious that he was taken to hospital, where he was a patient for three weeks.

Immediately after he had been pulled from beneath the van, the heat of the flames forced out the contents of the petrol tank and, in spite of all efforts, the van became a furnace, glass fittings and aluminium panels