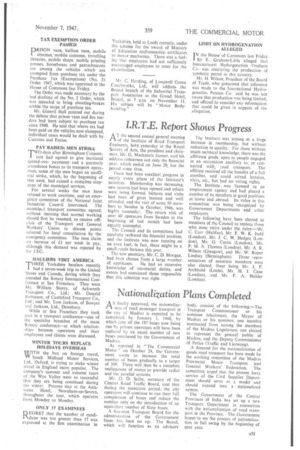 Page 33, 7th November 1947 — I.R.T.E. Report Shows Progress A T the second annual general meeting
Close
Noticed an error?
If you've noticed an error in this article please click here to report it so we can fix it.
Keywords : Labor

of the Institute of Road Transport Engineers, held yesterday at the Royal. Society of Arts, the president and chairman, Mr. G. Mackenzie Junner, said his address concernea not only the financial year, which ended on June 20, but the period since then.

There had been excellent progress in nearly every phase of the Institute's activities. Membership was increasing, new centres had been opened and others were being formed, lectures and visits had been of great interest and well attended, and the visit of some 50 members to Sweden in October, 1946, was highly successful. The return visit of over 40 operators from Sweden at the beginning of last month had been equally successful.

The Council and its committees had carefully revtewed the financial position, and he Institute was now running on an even keel; in fact, there might be a small credit balance this year. .

The new secretary, Mr. C. D. Morgan, had been chosen from a large number of applicants. He had an extensive knowledge of secretarial duties, and events had convinced those responsible that this selection was right.

The Institute was aiming at a large increase in membership, but without reduction in quality. For those without much technical knowledge, there was the affiliate*. grade, open to people engaged in an occupation ancillary to, or connected with, road transport. The affiliate received all the benefits of a full member, and could attend lectures, visits, etc., but had no voting rights.

The Institute was licensed as an employment agency and had placed a number of its members in good position: at home and abroad. Its value in this connection was being recognized by Government Departments and other employers.