HOW THE M.T. OFFI -TO-BE IS TRAINED 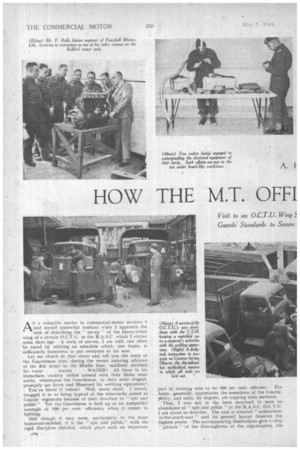 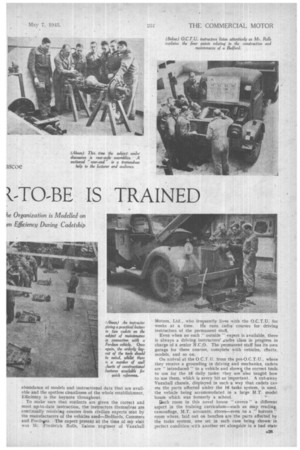 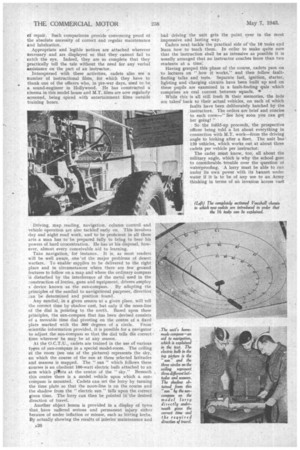 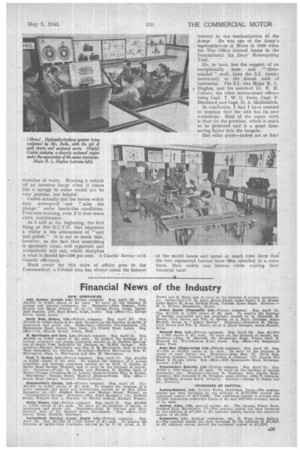 Page 26, 7th May 1943 — HOW THE M.T. OFFI -TO-BE IS TRAINED
Close
Noticed an error?
If you've noticed an error in this article please click here to report it so we can fix it.
Keywords : Compass, Navigation, Canadian Cadet Organizations

A s a complete novice in commercial-motor matters 1

find myself somewhat hesitant when I approach the

task of describing the " set-up " of the heavy-wheel wing of a certain 0.C.T.U. in the R.A.S.C. which I visited some days ago A state of nerves, I am told, can often be cured by relating an anecdote which, one hopes, is

• sufficiently humorous to put everyone at his ease. Let me clutch at that straw and tell you the story of the Guardsman who, during the recent amazing advance of the 8th Army in the Middle East, suddenly shrieked

for water . . WATER . : WATER! All those in his immediate. vicinity rallied around with their flasks most nobly, whereupon the Guardsman, to their utter disgust, promptly sat down and Blancoed his webbing equipment!

You've heard it before! Well, never mind. 1. merely dragged it in as being typical of the wisecracks aimed at Guards' regiments because of their devotion to " spit and polish." Yet the Guardsman is held up as an unequalled example of 100 per cent, efficiency when it comes to fighting.

Odd though it may seem, particularly to the more humorous-minded, it is the " spit and polish," with the rigid discipline entailed, which plays such an important part in training men to be 100 per cent. efficient. The Army, generally, appreciates the soundness of the Guards' rblicy, and units, by degrees, are copying their methods. Thus, I was not in the least surprised to note an abundance of "spit and polish "at the R.A.S.C. 0.C.T.U. I am about to describe. The unit is situated " somewherein-The-south-east " and its general layout deserves the highest praise. The accompanying illustrations give a cletir " picture " of the thoroughness of the organization, the abundance of models and instructional data that are available and the spotless cleanliness of the whole establishment, Efficiency is the keynote throughout.

To make sure that students are given the correct and most up-to-date instruction, the instructors themselves are continually receiving courses from civilian experts sent by the manufacturers of the vehicles nsed—Bedfords, Commers and Fordsons. The expert present at the time of my visit was Mr. • Frederick Rolls, liaison engineer of Vauxhall

Motors, Ltd., who frequently lives with the 0.C.T.U. for weeks at a time. He runs Cadre courses for driving instruc.tors of the permanent staff.

Even when no such " outside " expert is available, there is always a driving instructors' ,cadre class in progress in charge of a senior N.C.O. The permanent staff has its own garage for these courses, complete with vehicles, charts. models, and so on.

On arrival at the 0.C.T.U. from the pre-O.C.T:U., where they receive a grounding in driving and mechanics, cadets are " introduced " to a vehicle and showl the correct tools to use for the 16 daily tasks: they are also taught how to use them, which is every bit as important. A cut-away Vauxhall chassis, displayed in such a way that cadets can see the parts affected under the 16 tasks system, is used. the vehicle being accommodated in a large M.T. model house which was formerly a school.

rnach room in this novel house " covers " a different aspect in the training curriculum—such as map reading. camouflage. M.T. accounts, stores—even to a " horrors " room where, laid out on benches are the parts affected by the tasks system, one set in each case being shown in perfect condition with another set alongside in a bad state of repair. Such comparisons provide convincing proof of the absolute necessity of correct and regular maintenance and lubrication.

Appropriate and legible notices are attached wherever necessary and are displayed so that they cannot fail to catch -the eye. Indeed, they are so complete that they practically tell the tale without the need for any verbal assistance on the part of an instructor.

Interspersed with these activities, cadets also see a number of instructional films, for which they have to . thank one of the officers who, in pre-war days, used to he a sound-engineer in Hollywood. He has constructed a cinema in this model house and M.T. films are now regularly screened, being spiced with entertainment films outside training hours.

Driving, map reading, navigation, column control and vehicle operation arc also tackled early on. This involves day and night road work, and to be proficient in all these arts a man has to be prepared fully to bring to bear his powers of hard concentration. He has at his disposal, however, almost every conceivable aid to learning.

Take navigation, fot instance. It is, as most readers will be well aware, one 'of the major problems of desert warfare. To enablesupplies to be delivered to the right place and in circumstances where there are few ground features to follow on a map and where the ordinary compass is disturbed by the interference of the metal used in the :onstruction of lorries, guns and equipment, drivers employ a device known as the sun-compass. . By adapting the Principles of the sundial to navigational purposes, direction ran be determined and position found.

Any sundial, in a given season at a given place, will tell the correct time by shadow cast, but only if the noon-line of the dial is pointing to the north. Based upon these principles, the sun-compass that has been devised consists of a movable time dial pivoting on the centre of a fixed plate marked with the 360 degrees of a circle. From' .scientific information provided, it is possible for a navigator to adjust the sun-compass so that the dial tells the correct • time wherever he may be at any season.

At the 0.C.T.1.1., cadets are trained in the use of various types of sun-compass in a special model-room. The ceiling of the room (see one of the pictures) represents the sky, on which the course of the sun at three selected latitudes and seasons is mapped. The " sun" which follows these courses is an obedient 100-watt electric bulb attached to an arm which pilltots at the centre of the " sky." Beneath this centre there is .a model vehicle upon which a suncompass is mounted. Cadets can set the lorry by turning the time plate so that the noon-line is on the course and the shadow from the " electric sun " falls upon the correct given time. The lorry can then be pointed in'the desired direction of travel.

Another object lesson is provided in a display of tyres that have suffered serious and permanent injury either because of under inflation or misuse, such as hitting kerbs. By actually showing the results of inferior maintenance and A26 bid driving the unit gets the point over in the most impressive and lasting way. Cadets next tackle the practical side of' the 16 tasks and learn how to teach them. In order to make quite sure that the instruction shall be as intensive as possible it is usually arranged that no instructor coaches More than two students at a time: Having grasped this phase of the course, cadets pass on to lectures on " how it works," and then follow faultfinding talks and tests. Separate fuel, ignition, starter, lighting and charging circuits have been built up and on these pupils are examined in a fault-finding quiz which

comprises an oral contest between squads. "1 • While this is all still fresh it their memories, the lads are taken' back to their actual vehicles, on each of which faults have been deliberately hatched by the instructors. The orders are brief and concise to each crew—" See how, soon you can get her going! "

• So the bulild-up proceeds, the prospective officer being told a lot about everything in connection with M.T. work—from the driving angle to looking after a fleet. The unit has'. 120 vehicles, which works out at about three cadets per vehicle per instructor.

The cadet must know, too, all about the military angle, which is why the school goes to considerable trouble over the question of waterproofing. A lorry must be able to run under its own power with its lyannet under water if it is to be of any use to an Army thinking in terms of an invasion 'across vast stretches of water. Running a vehicle off an invasion barge when it reacts like a sponge to water would not be very popular, nor helpful.

Cadets actually test the lorries which they waterproof 'and " take the plunge " under beach-like conditions. First-rate•training, even if it does mean extra maintenance.

As I said at the beginning, the first thing at this 0.C.T.U. that impresses a visitor is the atmosphere of " spit and polish." It is not so much that, however, as the fact that everything is spotlessly clean, well organized and attractively laid out, whilst discipline is what it should be-100 per cent. A Guards flavour with Guards' efficiency.

Much credit for this state of affairs goes to the Commandant, a Colonel who has always taken the keenest interest in the mechanization of the Army: He was one of the Army's representatives in Wales in 1938 when the War Office entered teams in the International Six Days' Motorcycling Trial.

.He, in turn, has the support of an

exceptionally keen and " ideasminded " staff, from the S.I. (senior instructor) to the lowest rank of instructor. The S.I. was Major R. L. Hughes, and his assistant Lt. N. H. Calcott, the other instructional officers being Capt. I. W. G. Duka, Capt. P. Bradshaw, and Capt. H. S. Middleditch, In conclusion, I find I have omitted to mention that the unit has its own workshops. Most of the repair work is done on the premises, which is much to be preferred and is a great timesaving factor into the bargain.

One other point—cadets are so fond

of the model house and spend so much time there that the two regimental barbers have been installed in a room there. Now cadets can browse while wailing their tonsorial turn!