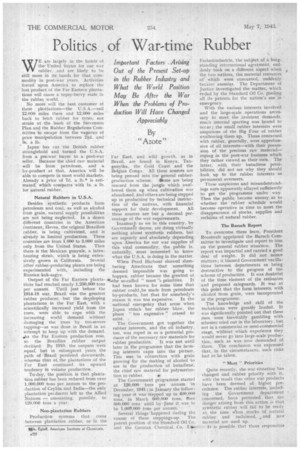 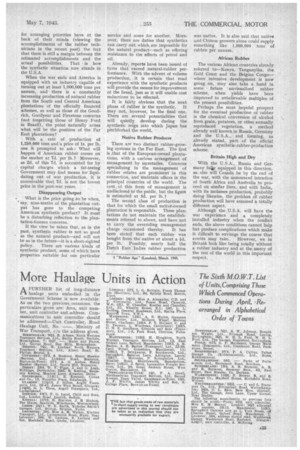 Important Factors . Arising Out of the Present Set-up in the Rubber Industry and What the World Position May Be After the War When the Problems of Production Will Have Changed Appreciably

WE are largely in the hands of the United States for our war rubber, and are likely to be still more in its bands for that commodity in post-war years. Activities forced upon America to replace the lost product of the Far Eastern plantations will cause a topsy-turvy state in the rubbei world.

No more will the best customer of these plantations—the U.S.A.—sail 12,000 miles there and 12,000 miles back to fetch rubber for tyres,nor strain at the leash of the Stevenson Plan and the Rubber Regulations Committee to escape from the vagaries of price manipulation between 2fd. and Gs. a lb.

' Japan has cut the British rubber stranglehold and turned the U.S.A. from a pre-war buyer to a post-war seller. Because the chief raw material will be from petroleum, and a by-product at that, America will be able to compete in most world Markets. Already a price of 7d. a lb.* is estimated; which compares with Is.. a lb. for natural rubber.

Besides synthetic products from petroleum and coal, as well as alcohol from grain, natural supply possibilities are not being -neglected. In a dozen different countries in the American continent, Heves., the original Brazilian rubber, is being cultivated, and is already in limited production. These countries are from 1,000 to 3,000 miles only from the United States. Then there is the Mexican guayule, a latex. bearing shrub, which is being exten sively grown in California. Several other rubber-producing plants are being experimented with, including die Russian -kok-sagyz.

Output of the Far Eastern plantations had reached nearly 1,260,000 tons per annum. Until just before the 1914-18 war, Brazil was the greatest rubber producer, but the developing plantations in the Far East, with a scientifically increased yield from the trees, were able to cope with the increasing world demand without damaging the trees by too-severe tapping—as was done in Brazil in an attempt to keep up with the demand. dts the Far Eastern production rose, so the Brazilian rubber output declined. By 1910, the outputs were equal, but in subsequent years the path of Brazil persisted downwards, whereas that ol the plantations of the Far East continued its upward tendency in volume production.

To-day, the position is that plantation rubber has been reduced from over 1,000,000 tons per annum to the production of Ceylon and India—the only plantation prcducers left to the Allied Nations — amounting, possibly, to 120,000 tons a year. Far East, and wild growth, as in Brazil, are found in Kenya, Tanganyika, the Gold Coast and the Belgian Congo. All these sources are being presed into the general rubberproduction scheme. *me are being rescued from the jungle which swallowed them up when cultivation was abandoned, and others are being stepped up in production' by technical instruction of the natives, with financial support for their development. All these sources are but a decimal percentage of the war requirements.

Inasmuch as we in this country, by Government decree, are doing virtually nothing about synthetic rubbers, but are supinely and absolutely depending upon America for our war supplies of this vital commodity, the public is, naturally, most interested to know what the U.S.A. is doing in the matter.

When Pearl Harbour showed slumbering Americans that something deemed impossible was going to happen, rubber became the greatest of "kthe so-called " must ". priorities. It had been known for some time that rubber could ,be made from petroleum by-products, but that for somebody's reason it was too expensive. In the national emergency that arose when Japan struck her rubber blow, the phase " too expensive" ceased to exist. • The Government got together the rubber interests, and the oil industry, too, was roped in as a potential producer of the necessary raw materials for rubber production. It was not until later in the programme, that the farming interests came into the picture. This was in connection with grain growing for the making of alcohol to use in the production of butadiene, the chief raw material for polymeriza tion to rubber. •• The Government programme started at 120,000 tons per annum In December, 1941; in January the following year it was stepped up to 400,000 tons, in March 600,000 tons, then S00,000 tons until by June it was to be 1,009,000 tens per annum.

Several things happened during the course of these steppings-up. The patent position of the Standard Oil Co. and the German Chemical Co. IS... Farbenindustrie, the subject of a longstanding international agreement, suddenly took on a different aspect when the two nations, thn material resources of, which were concerned, suddenly becams enemies. The Department of Justice inveStigated the matter, which ended by the Standard Oil Co. pooling all its patents for the nation's use in emergency.

With the various interests involved and the large-scale . operations necessary to meet the insistent demands, much internal sparring was bound to occur ; the small rubber interests were suspicious of the Big Four of rubber swallowing them up. Those concerned with rubber, generally, were apprehensive of Oil interests—with their possession of the precious raw material— roping in the post-war business which they rather viewed as their own. The latter, with their butadiene possibilities, did not see why they should look up to the rubber interests as permanent overseers.

These suspicions and misunderstandings were apparently allayed sufficiently to get the programme under way. Then the public became uneasy as to whether the rubber schedule would become operative in time to meet the disappearance of stocks, supplies and reclaims of natural rubber.

The Baruch Report To overcome these fears, President Roosevelt appointed the Baruch Committee to investigate and report to him on the general rubber situation. The report was impartial and carried a good deal of weight. It did not Mince matters; it blamed Government vacillations between departments as being destructive to the progress of the scheme of production. It was doubtful of the time element of the estimates and proposed safeguards. It was at this point that the farm interests, with alcohol from grain, were incorporated in the programme. The knowledge and skill of the technicians were greatly lauded. It was significantly pointed out that these men were inevitably gambling with schemer, tried out in the laboratory, but not in a commercial or semi-commercial stage, without which experience they would neer go into large-kale production, such as was now demanded Of. them. The conclusion was expressed that, in the circumstances, such risks had to be taken.

Quite recently, the war situation has changed and rubber priority with it. with the result that other war products have been deemed of higher precedence. •The rubber interests, including the Government department concerned, have protested that the danger. arising from this action is that synthetic rtibber will fail to be ready at the time %NI:Len stocks of natural rubber and reclaimed, and new material are used up.

It is possible that those responsible for arranging priorities have at the back of their minds (viewing the accomplishments of the rubber technicians in the recent past) the fact that there is still a margin between the estimated accomplishments and the actual possibilities. That is how the synthetic situation now stands in the U.S.A.

When the war ends and America is equipped with an industry capable of turning out at least 1,000,000 tons per annum, and there is a constantly increasiag production of natural rubber from the South and Central American plantations of the officially financed schemes, as well as those of the Goodrich, Goodyear and Firestone concerns (not forgetting those of Henry Ford in Brazil), the point naturally arises what will be the position of the Far East plantations?

With a rate of production of 1,250,000 tons and a price of Is. per lb. one is prompted to ask : What will happen if American rubber conies on the market at 7d."per lb.? Moreover, as 2d. of th,is 7d. is accounted for by capital charges which a far-seeing Government may find means for liquidating out of war production, it is conceivable that 7d. is not the lowest price in the post-war years.

Disappearing Output • What is the price going to be when, say, nine-tenths of the plantation output has gone to the competing American synthetic product? It must be a disturbing reflection to the plantation-finance concerns.

If the view be taken that, as in the past, synthetic rubber 4s not so good as the natural product-and will not be so in the future-it is a short-sighted policy. There are various kinds of synthetic product, some of which have properties suitable for one particular service and some for another. :Moreover, there are duties that synthetics can carry out which, are impossible for the natural product-such as offering resistance to the effects of petrol and oil.

Already, reports have been issued of tyres that exceed natural-rubber performance. With the advent of volume production, . it is certain that road experience with the synthetic products will provide the means for improvement of the lireed, just as it will enable cost reductions to be effected.

It is fairly obvious that the next phase of rubber is the synthetic. It may not, however, be the final one. There are several potentialities that will quietly develop during the synthetic reign into which Japan has pitchforked the world.

Native Rubber Producer There are two distinct rubber-growing systems in the Far East. The first is ,that of the European-owned plantations, with a curious arrangement of management by secretaries. Concerns specializing in the management of rubber estates are prominent in this connection, and maintain offices in the principal countries of the world. The cost , of this form of management is undisclosed to the public, but the figure is estimated at 5d. per 1134 The second class of production is that for which the small native-owned plantation is responsible. These plantations do not maintain the establishments referred to above, and have not to carry the overriding management charge occasioned thereby. It has been stated that such rubber was bought from the native at about a id. per lb. Possibly, nearly half the Dirtch East Indies rubber production was native. It is also said that native and Chinese growers alone could supply something like 1,000,000 tons of rubber per annum.

African Rubber The various African countries already referred to-Kenya, Tanganyika, the Gold Coast and the Belgian Congowhere intensive development is now going on, may also take a hand in some future • unvisualized rubber scheme, when yields _ have been improved to unbelievable multiples of the present possibilities.

Perhaps the most hopeful prospect for the eventual production of rubber is the chemical conversion of alcohol from grain, potatoes, or other annually reproduced vegetation, a method already well known in Russia. Germany and the U.S.A., and forming, as already stated, part of the official American synthetic-rubber-production scheme.

Britain High and Dry With the U.S.A., Russia and Germany fully equipped in this direction, as also will Canada be by the end of the war, with the announced intention of South Africa and Australia to proceed on similar lines, and with India, with its molasses production; probably doing likewise, the problem of rubber production will have assumed a totally different aspect.

Although the U.S.A. will have the war experience and a completely installed industry when the conflict ends, the above conditions cannot help but produce complications which make it difficult to envisage the course that events may take. However, we in Britain look like being totally without a rubber industry and at the, mercy of the rest of the world in this important respect.