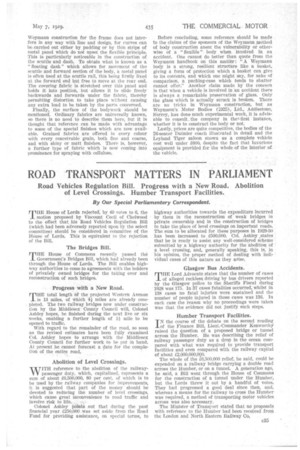 Page 67, 7th May 1929 — ROAD -. TRANSPORT MATTERS IN PARLIAMENT
Close
Noticed an error?
If you've noticed an error in this article please click here to report it so we can fix it.
Keywords : Transport, Land Transport, Bridges, Geography Of England, Level Crossing, Tunnel, Humber, Disaster / Accident

THE House of Lords rejected, by 49 votes to 6, the motion proposed by Viscount Cecil of Chelwood to the effect that. his Road Vehicles Regulation Bill (which had been adversely reported upon by the select committee) should be considered in committee of the House of Lords. This is equivalent to the rejection of the Bill.

THE House of Commons recently passed the Government's Bridges Bill, which had already been through the House of Lords. The Bill enables highway authorities to come to agreements with the holders of privately owned bridges for the taking over and reconstruction of such bridges.

Progress with a New Road.

THE total length of the projected Western Avenue is 13 miles, of which 4/ miles are already completed. The two railway bridges now under construction by the Middlesex County Council will, Colonel Ashley hopes, be finished during the next five or six weeks, enabling a further length of 14 mile to be opened to traffic.

With regard to the remainder of the road, so soon as the revised estimates have been fully examined Col. Ashley hopes to arrange with the Middlesex County Council for further work to be put in hand. At present he cannot forecast a date for the completion of the entire road.

WITH reference to the abolition of the railwaypassenger duty, which, capitalized, represents a sum of about £6,500,000, 80 per cent. of which is to be used by the railway companies for improvements, it is suggested that part of the money should be devoted to reducing the number of level crossings, which cause great inconvenience to road traffic and involve risk to life. ,

Colonel Ashley POI:es out that during the past financial year £250,000 was set aside from the Road Fund for providing assistance, on special terms, to

highway authorities towards the expenditure Incurred by them in the reconstruction of weak bridges in private ownership and in the construction of bridges to take the place of level crossings on important roads. The sum to be allocated for these purposes in 1929-30 has been increased to £500,000. Col. Ashley ,states that he is ready to assist any well-considered scheme submitted by a highway authority for the abolition of a level crossing, and, generally speaking, this is; in his opinion, the proper method of dealing with individual cases of this nature as they arise.

T11E Lord Advocate states that the number of eases of alleged recklesa driving by bus drivers reported by the Glasgow police to the Sheriffs Fiscal during 1928 was 175. In 37 cases fatalities occurred, whilst in 138 cases no fatal injuries were sustained and the number of people injured in those cases was 136. In each case the reason why no proceedings were taken was that the evidence did not justify such steps.

IN the course of the debate on the second reading of the Finance Bill, Lieut.-Commander Kenwortily raised the question of a proposed bridge or tunnel across the Humber. He was describing the relief of railway passenger duty as a drop in the ocean compared with what was required to provide transport facilities and even compared with the railway capital of about £2,000,000,000.

The whole of the £6,500,000 relief, he said, could be expended on a railway bridge carrying a double road across the Humber, or on a tunnel. A generation ago, he said, a Bill went through the House of Commons for the construction of a tunnel under the Humber, but the. Lords threw it out by a handful of votes. They had progressed a good deal since then, and, whereas a means for the railway to cross the Humber was required, a method of transporting motor vehicles across was also necessary.

The Minister of Transport stated that no proposals with reference to the Humber had been received from the London and North Eastern Railway Co,