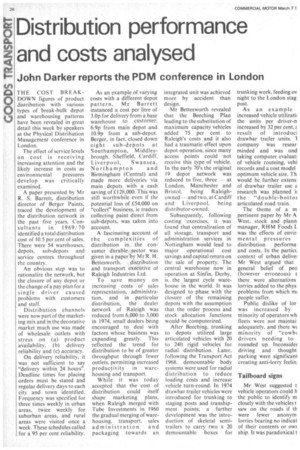 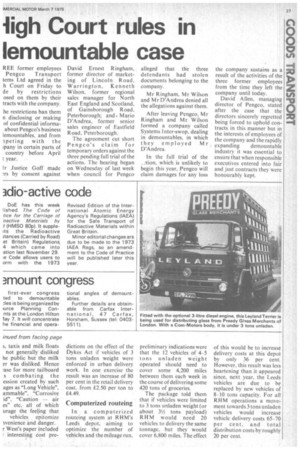 Page 28, 7th March 1975 — Distribution performance and costs analysed
Close
Noticed an error?
If you've noticed an error in this article please click here to report it so we can fix it.
Keywords : Trucks, Vehicles, Semi-trailer, Business / Finance

THE COST BREAKDOWN figures of product distribution with various types of break-bulk depot and warehousing patterns have been revealed in great detail this week by speakers at the Physical Distribution Management conference in London.

The effect of service levels on cost is receiving increasing attention and the likely increase in costs as environmental pressures develop was critically examined.

A paper presented by Mr R. S. Barrett, distribution director of Berger Paints, traced the development of the distribution network in the past five years. Con sultants in 1969 / 70 identified a total distribution cost of 10.5 per cent of sales. There were 54 warehouses, depots, sub-depots and service centres throughout the country.

An obvious step was to rationalize the network, but the closure of any depot or the change of a pay plan fora single driver caused problems with customers and staff.

Distribution channels were now part of the marketing mix and in the decorative market much use was made of wholesale outlets with stress on (a) product availability, (b) delivery reliability and (c) accuracy.

On delivery reliability, it was not sufficient to say "delivery within 24 hours". Deadline times for placing orders must be stated and regular delivery days to each city and town identified. Frequency was specified for three times weekly in urban areas, twice weekly for suburban areas, and rural areas were visited once a week. These schedules called for a 95 per cent reliability. As an example of varying costs with a different depot pattern, Mr Barrett instanced a cost per litre of 3.0p for delivery from a base warehouse to customer; 6.9p from main depot and 10.9p from a sub-depot. Berger, in fact, closed down eight sub-depots at Southampton, Middlesbrough, Sheffield, Cardiff, Liverpool, Swansea, Northampton and Birmingham (Central) and made more deliveries via main depots with a cash saving of iI28,000. This was still worthwhile even if the potential toss of 04,000 on "collect" business, ie traders collecting paint direct from sub-depots, was taken into account.

A fascinating account of the complexities of distribution in the consumer durable sector was given in a paper by Mr R. H. Bettesworth, distribution and transport executive of Raleigh Industries Ltd.

To save money on increasing costs of sales representation, administration, and in particular distribution, the dealer network of Raleigh was reduced from 6,000 to 3,000 in 1974, small dealers being encouraged to deal with factors whose business was expanding greatly. This reflected the trend for distribution to be of greater throughput through fewer outlets, permitting increased productivity in warehousing and transport.

While it was today accepted that the cost of distribution could itself shape marketing plans, when Raleigh merged with Tube Investments in 1960 the gradual merging of warehousing,. transport, sales administration and packaging towards an integrated unit was achieved more by accident than design.

Mr Bettesworth revealed that the Beeching Plan leading to the substitution of maximum capacity vehicles added 75 per cent to Raleigh's costs and it also had a traumatic effect upon depot operation, since many access points could not receive this type of vehicle. In the early 70's the original 19 depot network was reduced to five, three — at London, Manchester and Bristol, being Raleighowned — and two, at Cardiff and Liverpool, being distributor-owned.

Subsequently, following costing exercises, it was found that centralization of all storage, transport and administration services in Nottingham would lead to major operational cost savings and capital return on the sale of property. The central warehouse now in operation at Sinfin, Derby, is the largest cycle warehouse in the world. It was designed to phase with the closure of the remaining depots with the assumption that the order process and stock allocation functions would be computerized.

As an example increased vehicle utilizatil the units per driver-n increased by 32 per cent, result of introduci drawbar trailer units. 1 company was resear minded and was und taking computer evaluati of vehicle routeing, vehi records and a cost model optimum vehicle size. Th would be further extens. of drawbar trailer use a research was planned ii the "double-bottoi articulated road train.

The theme of a m pertinent paper by Mr A West, stock and plann manager, RHM Foods L was the effects of envir, mental pressures distribution performa. and costs. In the partici context of urban delivei Mr West argued that general belief of peo (however erroneous) t there were alternatives lorries added to the phys. problems from which mi people suffer.

Public dislike of lor was increased by minority of operators wh fleets were not maintah adequately, and there minority of "cowbc drivers needing to rounded up. Inconsidel driving and thought parking were significani creating anti-lorry feelin,

Mr West suggested t vehicle operators could Ii the public to identify m closely with the vehicles t saw on the roads if th were fewer anonym lorries bearing no indicat of their contents or owr ship. It was paradoxical t s, taxis and milk floats not generally disliked he public but the milk er was disliked. Hence :ase for more tailboard s combating the ession created by such ages as "Long Vehicle", ammable", "Corrosive id", "Caution air es" etc, all of which urage the feeling that vehicles epitomize ivenience and danger. r West's paper included interesting cost pre dictions on the effect of the Dykes Act if vehicles of 3 tons unladen weight were enforced in urban delivery work. In one exercise the result was an increase of 80 per cent in the retail delivery cost, from £2.50 per ton to £4.49.

In a computerized routeing system at RHM's Leeds depot, aiming to optimize the number of vehicles and the mileage run, preliminary indications were that the 12 vehicles of 4-5 tons unladen weight operated should need to cover some 4,200 miles between them each week in the course of delivering some 420 tons of groceries.

The package told them that if vehicles were limited to 3 tons unladen weight (or about 31/2 tons payload) RHM would need 20 vehicles to delivery the same tonnage, but they would cover 6,800 miles. The effect of this would be to increase delivery costs at this depot by only 36 per cent. However, this result was less heartening than it appeared since, next year, the Leeds vehicles are due to be replaced by new vehicles of 8-10 tons capacity. For all RUM operations a movement towards 3 tons unladen vehicles would increase vehicle delivery costs 65 70 per cent, and total distribution costs by roughly 20 per cent.