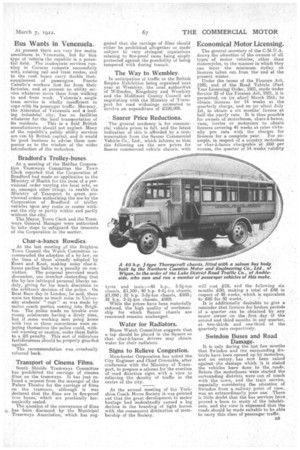 Page 7, 7th March 1922 — Char-a-bancs Rowdies. .
Close
Noticed an error?
If you've noticed an error in this article please click here to report it so we can fix it.

At the last meeting of the Brighton Town Council the Watch Committee recommended the adoption of a by-law, on the lines of those already adopted by Essex and Kent, making noisy char-kbanes parties liable to .a penalty on cenz viotion. The proposal provoked much discussion, one member contending that the by-law infringed personal liberty unduly, giving far too much discretion to the arbitrary decision of the police, On Boat Race day in London, he said, there were ten times as much noise in University students' "rags " as was made by motor coach parties coming into. Brighton. The police made no trouble over young aristocrats having a lively time, but if some working men going home with two or three concertinas were enjoying themselves the police could, without warning or caution, make them liable to a £5 penalty. This sort of ridicidout fastidiousness should be properly guarded against.

The recommendation was: eventually referred back.