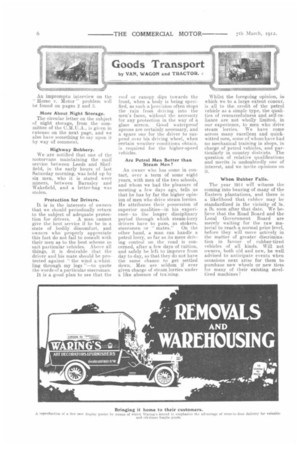 Page 6, 7th March 1912 — Goods Transport
Close
Noticed an error?
If you've noticed an error in this article please click here to report it so we can fix it.

An impromptu interview on the " Horse v. Motor " problem will be found on pages 2 and 3.

The circular letter on the subject. of night storage, from the committee of the C.M.U.A., is given in e.xtenso on the next page, and we also have something to say upon it by way of comment.

We are notified that one of the motorvans maintaining the mail service between Leeds and Sheffield, in the early hours of last Saturday morning, was held up by six men, who it is stated were miners, between Barnsley and Wakefield, and a letter-bag was stolen.

It is in the interests of owners that we should periodically return to the subject of adequate protection for drivers. A man cannot give the best service if he be in a state of bodily discomfort, and owners who properly appreciate this fact do not fail to consult with their men as to the best scheme to suit particular vehicles. Above all things, it is desirable that the driver and his mate should be protected against "the wind a-whistling through my legs "—to quote the words of a particular steersman.

It is a good plan to see that the roof or canopy dips towards the front, when a body is being specified, as such a 'provision often stops the rain from driving into the men's faces, without the necessity for any protection in the way of a glass screen. .Good waterproof aprons are certainly necessary, and a spare one for the driver to suspend over his driving wheel, when certain weather conditions obtain, is required for the higher-speed vehicles.

An owner who has come in contact, over a term of some eight years, with men of the two schools, and whom we had the pleasure of meeting a few days ago, tells us that he has by far the higher opinion of men who drive steam lorries. He attributes their possession of superior qualities—in his experience—to the longer disciplinary period through which steam-lorry drivers have to pass, as stokers, steersmen or "mates." On the other hand, a man can handle a petrol lorry, so far as its mere driving control on the road is concerned, after a few days of tuition, and safely be left to improve from day to day, so that they do not have the same chance to get settled down. Men are seldom if ever given charge of steam lorries under a like absence of tra:ning.

Whilst the foregoing opinion, in which we to a large extent concur, is all to the credit of the petrol vehicle as a simple type, the qualities of resourcefulness and self-reliance are not wholly limited, in our experience, to men who drive steam lorries. We have coma across many excellent and quickwitted men, some of whom have had no mechanical training in shops, in_ charge of petrol vehicles, and particularly in country districts. The. question of relative qualifications and merits is undoubtedly one of interest-, and we invite opinions on it.

The year 1914 will witness the coming into bearing of many of theEastern plantations, and there is. a likelihood that rubber may be standardized in the vicinity of 2s.. a lb. soon after that date. We believe that the Road Board and the Local Government Board aremerely waiting for the raw material to reach a normal price level, before they will move actively in. the matter of greater discrimination in favour of rubber-tired vehicles of all kinds. Will not owners, both old and new, be well advised to anticipate events when occasions next arise for them topurchase new wheels or new tiresfor many of their existing steeltired machines ?