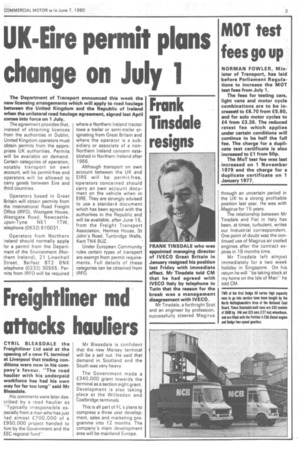 FRANK TINSDALE who was appointed managing director of IVECO Great Britain in January resigned his position last Friday with immediate effect. Mr Tinsdale told CM that he had agreed with IVECO Italy by telephone to Turin that the reason for the break was a management .disagreement with IVECO.

Mr Tinsdale, a forthright Scot and an engineer by profession, successfully steered Magirus through an uncertain period in the UK. to a strong profitable position last year. He was with Magirus for 15 years.

The relationship between Mr Tinsdale and Fiat in Italy has been, at times, turbulent, writes our Industrial correspondent. One point of doubt was the continued use of Magirus air cooled engines after the contract expires in 18 months time.

Mr Tinsdale left almost immediately for a two week holiday in Singapore. On his return he will "be taking stock at my home on the Isle of Man" he told CM.