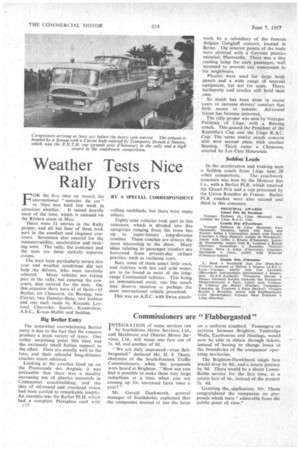 "We are duly impressed—even flabbergasted," declared Mr. H. J. Thom, chairman of the South-Eastern Traffic Commissioners, when the proposals were heard at Brighton. "How can you find it possible to make these very large reductions at a time when you are coming up for increased fares once a year? "

Mr. Gerald Duckworth, general manager of Southdown. explained that the companies wanted to put the fares on a uniform standard. Passengers on services between Brighton, Tunbridge Wells, Eastbourne and Hastings, would now be able to obtain through tickets, instead of having to change buses at the boundaries of the companies' oper ating territories. .

The Brighton-Hawkhurst single fare would drop by 8d., and a return journey by 9d. There would be a direct LewesBattle service for the first time, at a return fare of 6s., instead of the present 7s. 4d.

Granting the, application, Mr. Thom congratulated the companies on proposals which were "admirable from the public point of view."