Merchandise Judge Wants to Know About Return Running in Haulage 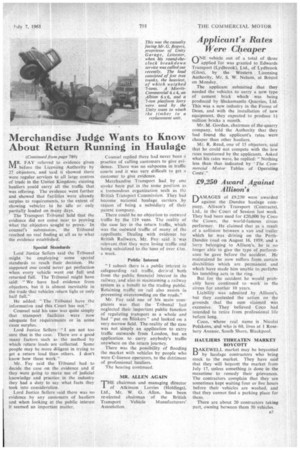 (Continued from page 789) MR. FAY referred to evidence given before the Licensing .Authority by 27 objectors, and said it showed there were regular services to all large centres of trade in the United Kingdom; existing hauliers _could carry all the traffic that was offering. The evidence went further and showed that facilities were already surplus to requirements, to the extent of showing vehicles to be idle or only partially loaded on many days.

The Transport Tribunal held that the evidence did not conic near to proving what the objectors sought to prove.In counsel's submission, the Tribunal reached no real finding at all as to what the evidence established.

• Special Standards Lord Justice Sellers said the Tribunal might ' be employing some special standards to reach their decision. He supposed one could never get perfection when every vehicle went out full and returned full. The Tribunal might have said: "We have had evidence from objectors, but it is almost inevitable in the trade that. Vehicles return light or only half full."

He added: "The Tribunal have the information and this Court has not."

Counsel said his case Was quite simply that transport facilities were now adequate for requirements or in some cases surplus.

Lord Justice Sellers: " 1 am not too sure that is the case. There are a good many factors such as the method by which return loads are collected. Some people may be more diligent in trying to get a return load than others. 1 don't know how these work."

Mr. Fay said the T1-ibunal had to decide the case on the evidence and if they were going to make use of judicial knowledge and practice in the industry they had a duty to say what facts they took into consideration.

Lord Justice Sellers said there was no evidence by any customers of hauliers and when looking at the public interest it seemed an important matter.

Counsel replied there had never been a practice of calling customers to give evidence. There was no subpoena in traffic courts and it was very difficult to get. a customer to give evidence.

Merchandise Transport had by one stroke been put in the same position as a tremendous organization such as the British Transport Commission. They had become national haulage. carriers by reason of being a subsidiary of their parent company.

There could be no objection to outward traffic by the 119 vans. The reality of the case lay in the return traffic, which was the outward traffic of many of the appellants. Dealing with evidence for British Railways, Mr. Fay said it was relevant that they were losing traffic and being subsidized to the tune of Over f. I rn. a week.

" I submit there is a public interest in safeguarding rail traffic, derivad both from the public financial interest in the railway, and also in maintaining a railway system as 4 benefit to the trading public. Retaining traffic on rail also assists in preventing overcrowding on the roads."

Mr. Fay said one of his main complaints was that the Tribunal had neglected their important public function of regulating transport as a whole and had "put on blinkers" and looked on a very narrow field. The.reality of the case was not simply an application to carry traffic outwards from London, but an application to carry anybody's traffic anywhere on the return journey.

There was the possibility of flooding the market with vehicles by people who were C-licence operators, to the detriment of professional hauliers.

THE chairman and managing director of Atkinson Lorries (Holdings), Ltd.. Mr. W. G. Allen, has been re-elected chairman of the British