A Stand-to-stand Report of the Vehicles, Tractors and Mechanically Propelled 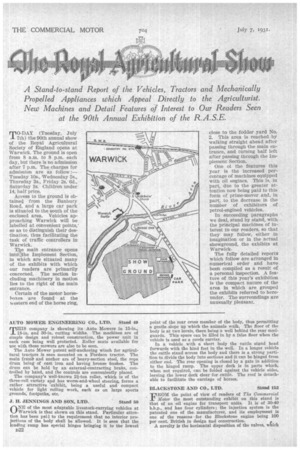 Page 76, 7th July 1931 — A Stand-to-stand Report of the Vehicles, Tractors and Mechanically Propelled
Close
Noticed an error?
If you've noticed an error in this article please click here to report it so we can fix it.

Appliances which Appeal Directly to the Agriculturist. New Machines and Detail Features of Interest to Our Readers Seen at the 90th Annual

Exhibition of the R .A.S.E.

7th) the 90th annual show of the Royal Agricultural Society of England opens at Warwick. The ground is open from 8 a.m. to 8 p.m. each day, but there is no admission after 7 p.m. The charges for admission are as follow :Tuesday 10s., -Wednesday 5s., Thursday 3s., Friday 2s. 6d., Saturday is. Children under 14, half price.

Access to the ground is obtained from the •Banbury Road, and a large car park is situated to the south of the enclosed area. Vehicles approaching Warwick will be labelled at convenient points,' so as to distinguish their destination, thus facilitating the task of traffic controllers in Warwick.

The main entrance opens inaKithe Implement Section, in which are situated many of the exhibits with which our readers are primarily concerned, The section including machinery in motion lies to the right of the main entrance.

Certain of the motor horseboxes are found at the 'Western end of the horse ring,

One 01 the features this year is the increased per-. centage of machines equipped with oil engines. This is, in part, due to the greater attention now being paid to this form of prime-mover and, in part, to the decrease in the number of exhibitors of petrol-engined. vehicles.

In succeeding paragraphs we deal, stand by stand, with the principal machines of interest to our readers, so that they may follow, either in imagination or in the actual showground, the exhibits at Warwick.

The fully detailed reports which follow are arranged in numerical order and have been compiled as a result of a personal inspection. A feature of this year's exhibition is the compact nature of the area in which are grouped the exhibits referred to hereunder. The surroundings are unusually pleasant.